This is a bug report for Move the vote button which is currently in A/B testing on Stack Overflow.

Today I tried to downvote question which is lengthy in size. So I've scrolled down to read and decided to downvote it. So I've got Downvote without comment notification like below. 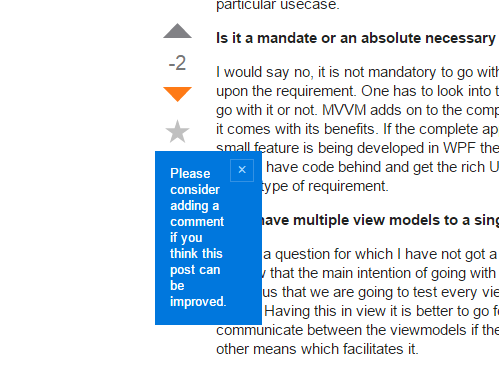 I think it should show up like below to keep consistent everywhere.

I recreated this problem :)

Before the vote buttons stick to the top of the viewport

td.votecell has been given position: relative so the position: absolute div.message is now confined to the thin table cell.

After the sticky buttons stick to the top of the viewport

The div.vote is now given the inline style of position: fixed so the div.message is now confined within the thin div.

Give the .message div white-space: nowrap so that it overflows:

I changed the padding of div.message-close (the x close button) to padding: 2px 4px 0px 4px and I swear that it looks better.