I recently flagged a low-quality answer (full text of answer: "Your answer is may be best. Thank u.") with a "Not An Answer" flag. Upon further investigation I grew suspicious that there may have been some sock puppet action going on (the answer was immediately upvoted and accepted, and OP and answerer had the same username). As a result I clicked the flag button again on the answer and was met with essentially following dialog (mine didn't have the "very low quality" flag because the answer had been upvoted): 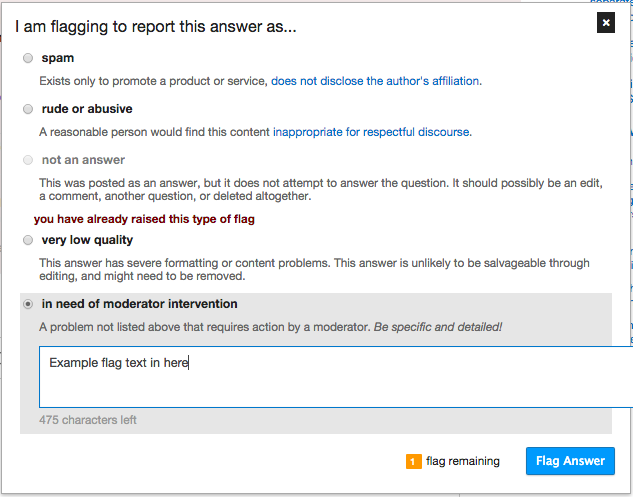 To me, this dialog suggests that I am allowed to raise any additional flag other than "not an answer" because all the other options can be selected as usual in the dialog. After typing the minimum number of characters in the custom flag box, the "Flag Answer" button became blue, just like usual.

After crafting my well-written custom flag text explaining the situation and clicking the "Flag Answer" button, I was dismayed to get the following message:

I have no problem with the rule that you can't double flag an answer (and it didn't slow me down in this case -- I just custom flagged the question instead of the answer, and the mods swiftly handled the situation), but I do think the flag dialog should be modified to indicate that no additional flags can be raised. Not only does it make more sense as a user interface, but it will prevent custom flag messages from getting gobbled up into an angry red box.

3
Either allow flagging an answer twice for different reasons, or fix the interface accordingly

17
Flag Dialog shows that I have already raised some flags but not others, but I am disallowed from raising any types of flags
6
Known Redundant Flag is not Identified in Flag Dialog
27
Serial voting not reversed, but flag marked as helpful
24
Very Low Quality flag declined on an answer that was both very low quality and technically inaccurate
14
Where is Low Quality flag?
2
How to flag a low quality answer when the option is missing from the flags?