Why does the "people reached" counter use a lowercase "m" for millions?

As far as I know, the usual unit prefix for millions is mega, written as M. I think it should apply to unit-less numbers as well.

Thus, I suggest that

It's arguably much cooler to see a bigger M anyway.

Meta makes a good point: these aren't SI units, it's EN-US slang (more or less). For most people in EN-* locales, the UX is better than SI units would be, with no loss of accuracy or real problems.

As far as I know, the usual unit prefix for millions is mega, written as M.

The usual prefix for mega is M. It just so happens that mega is of the order of magnitude of millions, so a sloppy equivalence (similar to PHP's ==) makes people think that million actually means mega.

We're not speaking mega-people-reached, or kilo-people-reached here. Those unit signs should apply when referencing standard, internationalized units, not people who may have viewed your activity on Stack Overflow.

How about a compromise:

TL;DR: This is an abbreviation of the number, not of the unit.

As noted, M is an SI prefix for mega-, but I think the important point being missed here is that not only does the usage in question not actually mean mega nor is it for an SI unit, but it isn't even a prefix (it's being used as a suffix to the number, not a prefix to the unit; the unit isn't megapeople, it's still people).

It's common in all English-speaking locales (AFAIK) to abbreviate million to m; for example "4m points" is literally read as "four million points", not "four megapoints".

In the SI system, the standard unit for discrete quantities / number of things isn't "1", or "people", it's the mole ;-)

So, you can write in English, in which case "4.4m people" is a cromulent abbreviation of "4.4 million people", and I think more common than 4.4M. Or else you can use SI units, in which case it's 7.3 attomoles of people. I don't think SI is useful for this purpose, even on Chemistry.

In UX you choose between SI and other English-language conventions as suits you. In this case I don't think there's any good case for the SI prefix M over the English abbreviation of "million" m. They are after all SI prefixes, used before an SI unit. They aren't SI suffixes used after a number. And if they were, then "200m" would be ambiguous between "200 metres" and "0.2". There's nothing to stop you using them that way, 4.4M is comprehensible, but it's not the international standard and it is not more noble than using other numeric abbreviations.

If Stack Exchange were localised for India then it might usefully say 44 lakh or 44L (I haven't checked). In simplified Chinese I think it would be 440万 (I don't know any Chinese, but that's what I see for play counts on video sites and suchlike). Leaving aside moles because they're incomprehensible to real people, there is currently no ratified international standard for writing large numbers. Don't treat 4.4M as if it is one.

Abbreviations for million and where they are used seems to not contain a lower-case 'm' . I would normally use the abbreviation 'mil' but it's not on this list either :/ 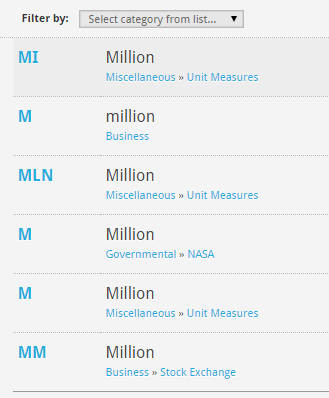 Let's go with 'M' because NASA uses it :D

We don't need no SI units 'round here. The m stands for "million" as in "you're one in a million, baby". And you know that you are - but this is still status-declined.

Note that on some other sites, the suffixes will be different:

...and in some cases, so will the the scale:

See also: Use 'M' for million instead of 'm'

Why not MM, like the financial people use? I believe this comes from Roman numeral M meaning thousand, so 4.4 MM is 4.4 thousand thousand or 4.4 million.

How about powers of two?

Sufficiently geeky for Stack Overflow and no letters to be confused about. Also, it's kind of programming-related!

1
The suffix for number of people reached should be M, not m
59
Impossible vote count
122
Users Can Report Bugs On Whatever Child Meta Site Suits Them
27
Add separators to view counts?

79
Should "Professionals and enthusiasts" be qualified in the help center?
40
Two little things against the flood of very low quality (VLQ) questions
2
Can instructions for linking to a specific answer be made easier to find?
89
Allow non-gold-badge-holders to suggest multiple duplicates and change suggested duplicates
14
Please stop redirecting performance problems to Code Review