I was recently reading Handling floods of "too minor" suggested edits when I realized I had seen a pattern of such edits by a specific user recently. Admittedly, there are plenty of this user's edits which I'd agree with, and I admire the determination to correct consistent spelling errors littered through SO questions.

That being said, this user has a clear pattern of performing many edits within a short span of time - systematically targeting a very specific spelling mistake (IE. "Funtion", "genrate", et al.). These edits generally consist of only fixing the spelling mistake in the question title, sometimes within the question body, and rarely address other prominent issues that could be addressed simultaneously (if the edit was truly that necessary).

As mentioned, this is abundantly discussed in other threads. In perusing some of the more recent suggested edits, I noticed the following pattern of Approve and Edit by one user: 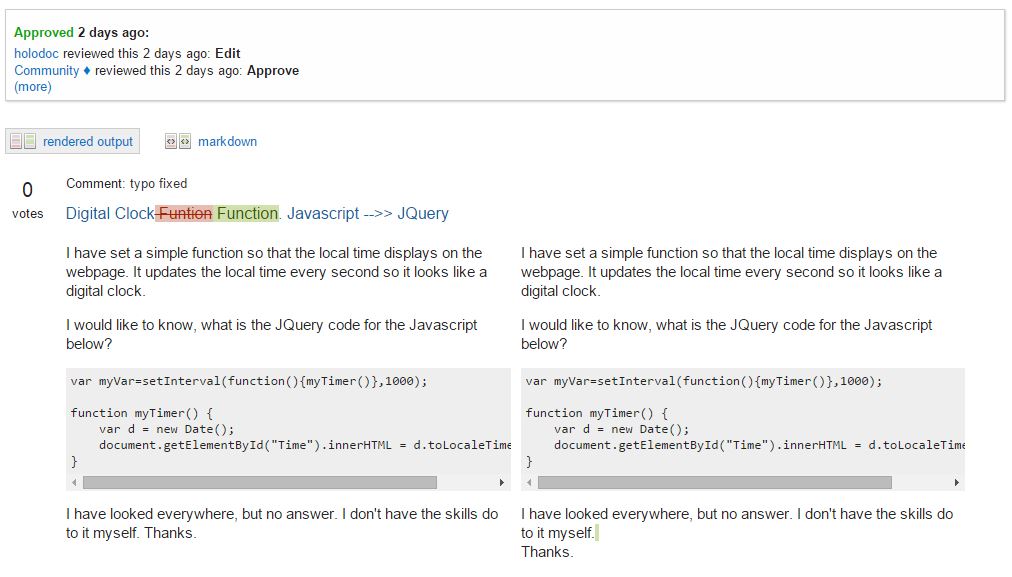 There were around 8 suggested edits by the user approved and edited by the second user. Why? Of course, it's possible the latter coincidentally happened upon these edits before others could Approve/Reject, and genuinely thought these edits were worthwhile given additional attention. However, nearly all of the Approve and Edits were similarly small edits to the title (rewording, spelling, additional word, etc.).

Is some type of action necessary here or is there something I've not yet understood about the process of approval that I need to know? Don't get me wrong, I've made some edits that in hind site would rather have not suggested. But not enough to consist of ~66% of my reputation.

I looked into this a bit and I can't see anything to suggest that this is a coordinated scheme of abuse.

Theoretically a user with > 2K could abuse the edit review system to bootstrap sock puppets by hitting improve on all of them. If that were the case I'd usually expect:

I don't see anything as evidence for any of those checks in this case, so it seems likely that everyone involved here was just doing their thing.

Probably the reviewer shouldn't have ticked "this edit was helpful" when improving, but that's not terribly major.

320
"Too minor" edits - better to leave poor quality on the site?
28
Handling floods of "too minor" suggested edits

35
Should we be able to flag suggested edits?
61
Same one-letter edit suggested to nearly 60 questions. Should I alert a moderator?
40
Please don't just approve trivial suggested edits - rather improve the edit per the scope
49
Provide more guidelines for reviewing edits
4
Should a high-rep user post the edit as his own even if it adds nothing new to already suggested proposal?