Highlight the preview on the Ask Question page

I can't count the number of simple errors in questions that a glance at the preview would highlight for the person posting them, such as

And yet, even though they have to scroll past it to click the [Post Your Question] button, new users don't seem to look at the preview at all. I suspect it's partially because the preview isn't called out in any way, it just looks like text on the Ask Question page, and as we know People Don't Read, they just scan for the nice button.

For instance, right now, this what the page is showing me: 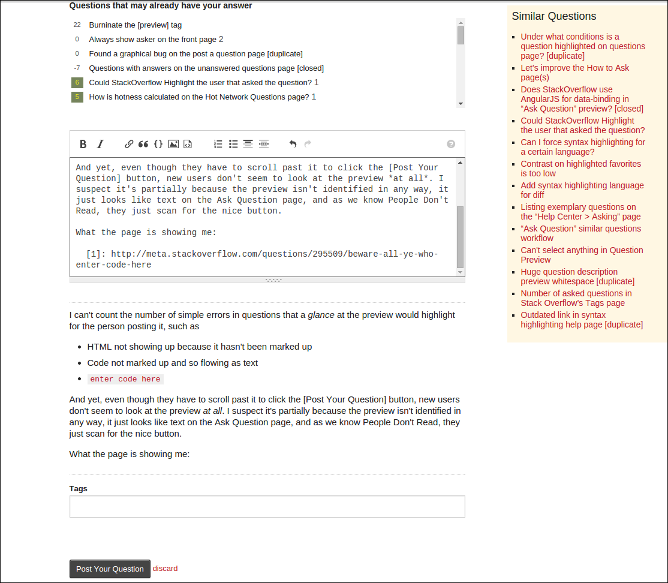 But this is what I see: 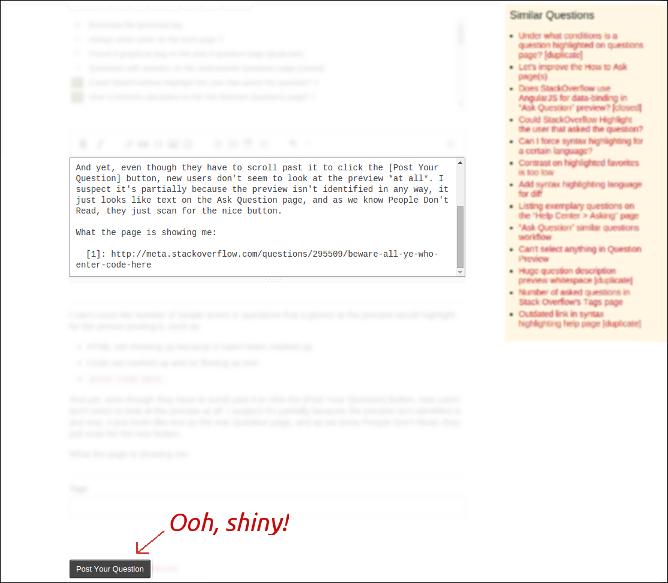 Perhaps we could highlight and identify the preview, to at least increase the odds of the user taking notice of it before they click? Something like: 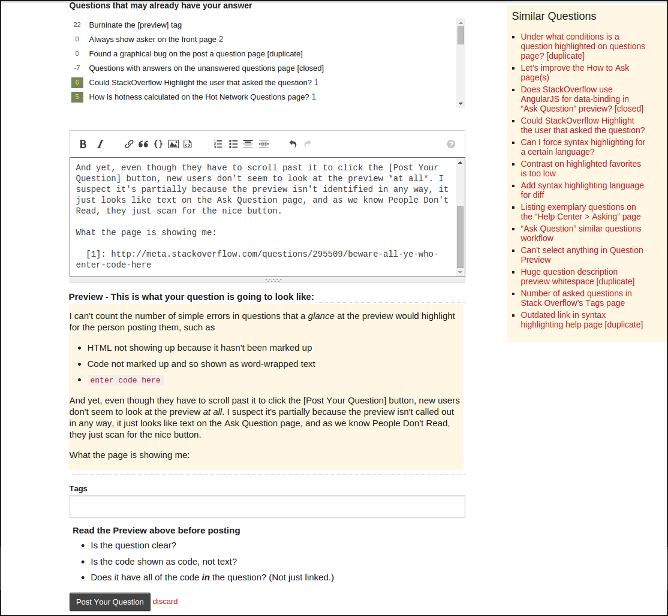 And a follow-on specific to new users: Require new users to check the preview before posting

(Maybe if it gets implemented it should be checkboxes, so that the asker actually have to active do something to click on the boxes) – Rizier123

I would support making them checkboxes, and don't let the user post until they're all checked.

Yes, some people will just automatically check them without going over their post. Those people are hopeless. But for the people who do want to do things right but don't know how, this can be very helpful.

I don't think those points would help in the least. You can highlight things all you want and point big fat arrows to it, people who do not want to see won't see it either way. What colour the "yadayadayada" between the textarea and the submit button has is pretty irrelevant for someone scrolling right over it.

It is telling that often questions which are clearly missing their HTML stay that way forever. Even after posting the question the OP does not notice! Or if they notice, they don't know how to fix it. Or perhaps they believe that "it's a problem with my browser and others must surely see it okay because I've pasted it into the textbox after all, right?"

Nothing will help those people, we do not need to clutter up the UI even further.

That I can get on board with. The preview should clearly be labeled as "This is what your question is going to look like: ..." – It will clarify things for the few people who do pay attention. To help those along further, you should add a "...doesn't look like you expected? Read the Editing Help."

Beyond this, adding more text and having people jump through more hoops and checkboxes probably won't do much. People are great at ignoring messages and clicking the buttons.

If anything, presenting an entirely different UI may do something. I can imagine this scenario is somewhat common:

The problem here may be that there's no mental connection or expectation between the text input and a live preview, because the preview is not seen during text input. If you'd put both side by side, that connection would be a lot harder to miss. That may be a UI change which would reach many more users.

140
Beware, all ye who `enter code here`
95
Establish a two stage question commit process?
153
Require new users to check the preview before posting
54
Rewriting the official editing help explanation
26
It should be made more clear for the new users, that they can preview the post

153
Require new users to check the preview before posting
4
Display Basic Guidelines in New Question Window
8
Can I download the Stack Overflow editor?
177
Changing new users' expectations of this site *before* they ask their question by requiring them to pass a test