Are DRY questions on topic?

Asking "give me teh codez" type questions are frowned on, but what about questions that blindly ask us to refactor their code for them? The question titles rarely contain any useful keywords (eg. DRY up my [insert language name here]) and as a result, they really only serve the OP.

Such questions might be a good fit for CodeReview if they were phrased differently and didn't also contain broken code.

Many of the questions that appear under the dry tag are also quite opinionated.

Related meta topic on CR: Are reviews that ask us to DRY their code within the spirit of CR?

That said, DRY or other code improvement requests could be on topic if the problem they are trying to solve is absolutely clear and not overly broad. Most of the questions I looked at in the DRY tag were too broad and should be closed as such.

These questions might be asking for the same thing:

The first question is vague and could be applied to thousands of code reduction requests (and there may be other issues with the code other than the fact that they're using more markup than they need). The second is clearly trying to tackle a single, specific problem.

The question should be able to stand on its own as a specific problem. Wishy-washy "show me how to make it less repetitive" questions should be downvoted for showing a lack of effort/research (or possibly closed as being too broad).

If you have trouble trying to do this on your own, make sure that when you ask your question that it focuses on resolving your failed attempt rather than asking for your code to be refactored (eg. I tried to do X, but got error Y). Oh, and always make sure you search to make sure your question hasn't already been asked/answered before.

Yes. All these askers are dealing with a specific programming problem that they need help with. That's totally in the scope of SO.

As that MCR question you dug up states, these kinds of questions are equally on-topic at CodeReview. And if they were more generic questions like "How do I tackle [this kind] of ugly repetitive code in [framework|language|situation XY]?", they might even be on-topic at Programmers as well.

Admittedly, many of those questions are badly written and deserve downvotes. "Gimme teh codez" is not acceptable, and questions that show a lack of understanding (like when not knowing loop statements) deserve to be downvoted.
One can write very good questions about DRYing code that show prior research (what techniques are available) and include the attempts at applying those techniques (explaining what the problems in the process were met or how the result is still not satisfactory). Those of course are rare.

DRY questions (as normally stated) are not on topic for Stack Overflow.

We're a site dedicated to useful programming knowledge. While DRY questions typically embody 'programming' and 'knowledge', they're far less useful than they need to be to a wider internet audience.

"DRY" questions typically have a title that isn't useful to your every day Googler (Our audience, as it turns out):

How would I make this Racket Code DRYer?

There are a grand total of two words in that title that have any google juice: "Racket" and "DRY" (hoping google is smart enough to discern DRY from dry).

So we have an immediate problem: Anyone who has a similar issue to the OP won't be able to find their answer.

Then we get into the meat of the OP's problem:

The problem is that it's not very DRY. Since I'm using a Lisp, and Lisp is known for being able to do crazy things, I want to know if there's a way to take all the subprocess code and extract it so I can do something like: (code removed)

Again, no google juice here. That means that the problem will likely not be found by other people on the internet, which is a core tenet of Stack Overflow: Whatever question you pose needs to have utility for others.

It's the "If a tree falls in the forest" problem: If no one can find your question when they have the same problem, it needs to be edited or closed until it's improved.

DRY questions typically have these problems; I just took this example because it's the newest iteration I saw.

DRY questions as a whole are inherently un-googleable. As such, they should be off topic (our old close reason "too localized" would have been a good fit for this): 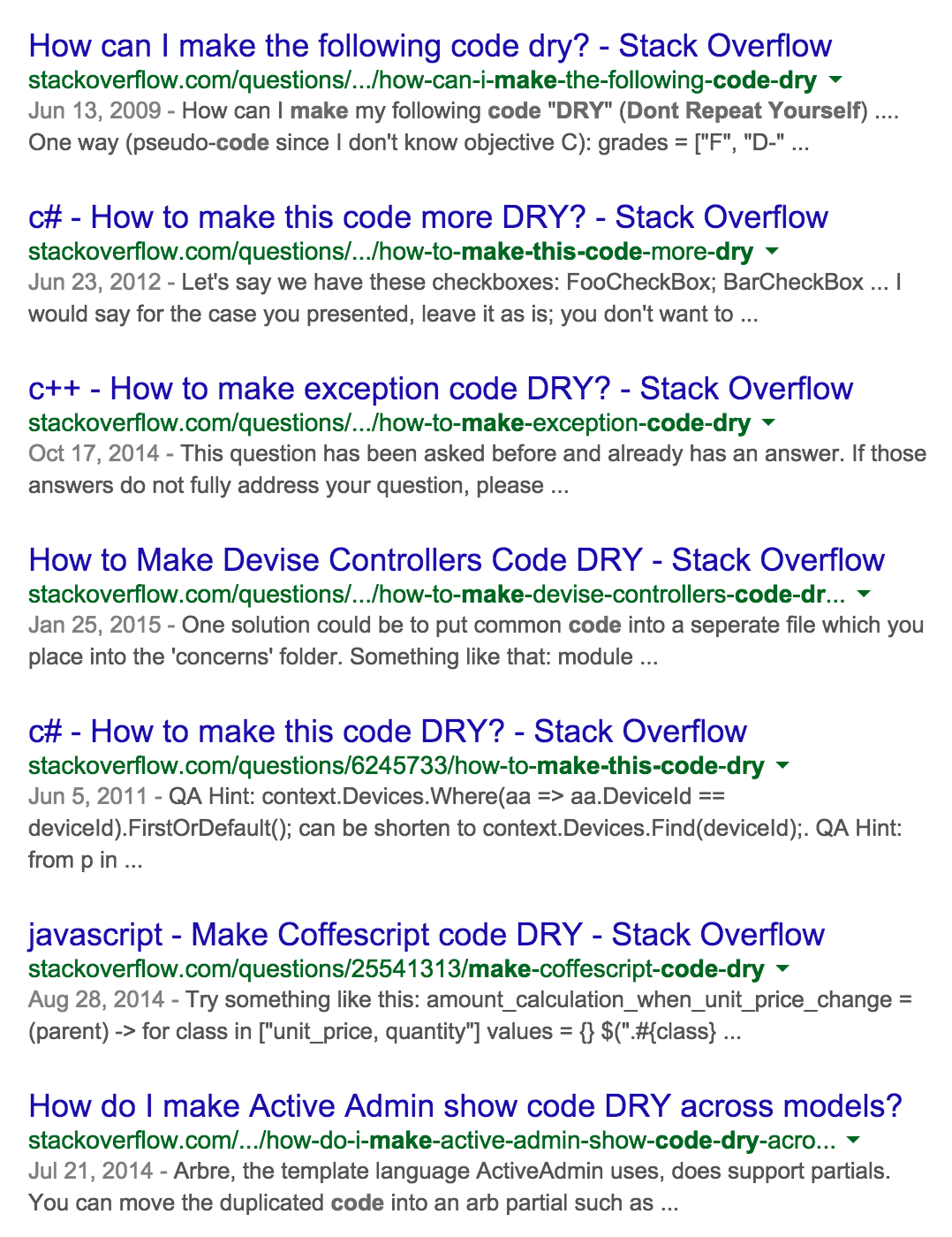 Code Review was made for such questions; they've specifically focused on improving code; whereas those types of questions are ostensibly about programming, but not useful to others unless they're written really really well.

This sounds like it might be on topic for the Code Review area. Nowhere else, I think.

23
Feature request: add blurb about Code Review in "How to Ask"