Since the introduction of Stack Snippets, I've noticed them showing up frequently with non-runnable code. (I spend most of my time on the google-apps-script tag, which is a server-side js variant. I imagine that node-js folks see the same. Sure enough - it's mentioned in this question for casperjs as well.) 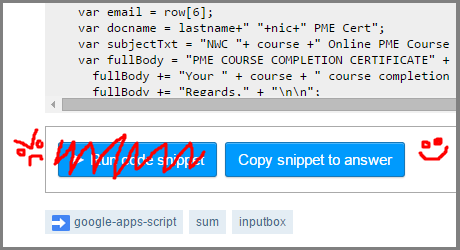 I can see value in Stack Snippets for js variants, for the code tidy-up within the editor and "copy to answer" function. But the "Run" button is prominent & useless.

Is there a way that I can edit a question to leave the snippet in place, but disable the "Run" button?

Copying a bog-standard code-sample to the answer is easy enough, the copy-to-answer button is not valuable enough to balance blatant misuse of the feature.

Easily done, but not documented. (Until now, that is!)

Turns out there's zero tolerance on the syntax of the begin comment, therefore you can disable snippet controls by making that comment line invalid. A whitespace violation is enough, but I'm proposing using runnable: false in the hopes that it turns into a feature that only removes the "run" button, leaving the still-useful "copy snippet to answer" button.

Other 'typos' that can disable the snippet widget:

I think it's nice to have a replacement for jsFiddle and CodePen and others that were so often linked too. It would be nice if Runnable Snippets could run other kinds of snippets too, but HTML+CSS+JavaScript is as easy as combining them and feeding them to an iframe, so it was the obvious choice to start with.

It's going to be hard to build it for other languages

I think the next step would be excessively harder to build. You'd need a completely different UI to select from a multitude of languages, and you require a big server capacity and complex configuration to run all that stuff. Because once there is a Node.js tool, PHP users will want one too. And eventually you'll be running COBOL code somewhere.

But let's still keep the current one

Personally I'm glad with this feature, and I think it's acceptable that it works only for, basically, client-side web questions, and removing this feature because it is misused doesn't seem the right way to go. After all, new users make mistakes with the normal code snippet button too. That's what new users do, and often it's simple to fix. A small checkbox to mark it as 'Non runnable' could make life easier for those who edit the questions.

And add some features to normal code snippets

But maybe there can be some modification to the snippets inserted by the normal {code sample} button. They could have a 'copy snippet to answer' button as well, and maybe also a possibility to select a language in case the automatic detection failed.

Doing so gives no a richer experience for normal snippets, and an additional simulator for client-side web code, which may in the future be expanded with other languages as well.

2
Is it acceptable to edit out "stack snippet" formatting that has no benefit over `code formatting`?
190
Feedback Requested: Code Editor and Stack Snippets
165
Stack Snippets being misused
23
Visually group code and snippet icons, and clarify which one to use
-9
Feature request: Adding a Stack snippet can automatically detect what code is in the question already?