Warning when snippet mark-up is used on posts not tagged with <...>

I've seen many questions where Java, SQL, etc. code was marked up using a snippet tool. In such cases we are presented with a more cluttered screen for no benefit at all.

Since currently only HTML/CSS and JavaScript code is supported, why not produce a warning when saving the question if it does not have any of these tags? When (and if) additional snippet functionality is developed, we will just need to expand the tag list.

My suggestion is somewhat in the middle between "do nothing now" and "remove automatically".

I believe that a warning is a gentle enough measure to get some additional clarity.

If a user right-out ignores the "HTML", "CSS" and "JavaScript" labels on the snippet UI, I think they are rather likely to ignore tooltips and popup warnings just as well.
As stated in the first meta post you linked to:

The users [...] seem to be brute-forcing their way by pasting their code dump into the first box they see.

Another problem is that even if the snippet contains HTML/CSS/JS code, the vast majority of snippets are still not actually runnable.

In my original answer I suggested a privilege, but I feel like I need to say more to that.

In light of that, I suggest making access to the snippet button a privilege, awarded somewhere between 25 and 100 reputation.

This will certainly not prevent all misuse, but most, I think.
Manually adding the required HTML comments should still be possible though, because if a user knows how to do that and is willing to go through the effort, they can be assumed to have a very good reason to do so.

Now the problem with that is of course, as AJPerez stated in the comments below:

If a post could actually benefit from a runnable snippet, let the user add it.

I very much share that opinion, but if it stands "prevent 50% snippet misuse" versus "prevent 90% snippet misuse and block rep<25 users from accessing it", I'm afraid I'm going with the second option.
That numbers are just speculation of course, but I've searched for an hour and a half, and out of all misused-snippet posts I found, the OP with the highest reputation had 26.

Also, Tanner suggested "better guidance" in the comments.
If there is at all a canonically correct approach to address any misuse, then it is exactly that: better guidance.
The problem with this, however is: How do you make the users listen (or read)?
Because show me a user who ignores the "HTML"/"CSS"/"JS" labels, but listens to a warning popup, especially after having their code already pasted.

However, I think by slightly modifying the "warning idea", you could actually get the user's attention.
Because currently it goes like this:
The user is looking for somewhere to paste their code. As soon as they find it, it's game over, their only goal now is to reach the post button. (I'm sure there are less aggressive users as well, but to me it actually feels like 90% of low-rep users are like this.)
So instead of showing a warning after the user had the chance to paste their code, it should be shown before.

For example, when opening the snippet UI for the very first time, instead of the editing panel popping up, why not make something like: 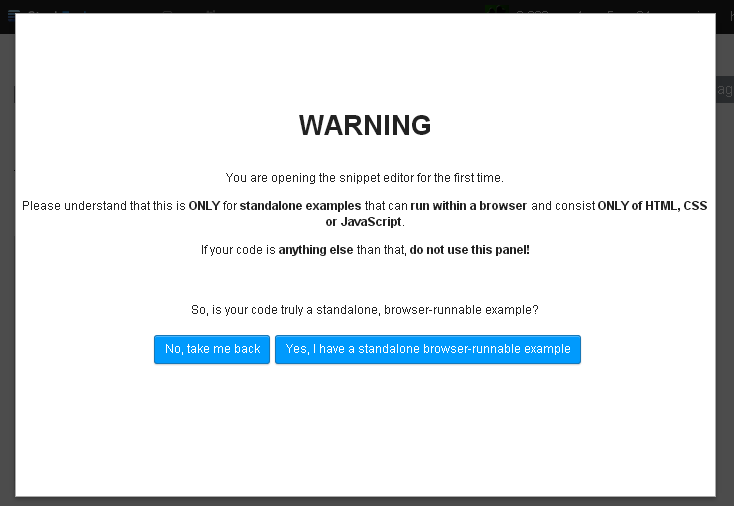 (I think the most important thing about it would actually be the WARNING at the top, to get the user's attention.)
That might still not catch all evildoers, but I imagine it having a bigger chance of doing so that a warning after all the pasting and editing.

So, my new suggestion is to implement a scary-looking first-time warning like the one above, and if still too many low-rep'ies just brute-force their code into the snippet editor, just cut the crap and make snippet editor access a privilege as suggested in my original answer.

Now in addition to that, I suggest a couple of relatively small, but in my opinion still important changes:

Not the answer you're looking for? Browse other questions tagged discussion feature-request stack-snippets .

190
Feedback Requested: Code Editor and Stack Snippets
50
Should questions with unnecessary Stack Snippets be edited?
50
"JavaScript snippet"? But I use it for HTML and CSS as well!
126
Should it be more obvious that stack snippets are only meant for HTML/CSS/JS?
46
Questions involving database queries - can we make it easier for people to create well-formatted data for testing
99
Code snippets are a pest
58
Replace code snippets by normal code block if JavaScript tag is absent

787
Feedback requested: Runnable code snippets in questions and answers
26
Warning if using jQuery in snippet and jQuery not tagged/used in question
90
Should there be a warning when a post is tagged with [java] and [javascript]?
126
Should it be more obvious that stack snippets are only meant for HTML/CSS/JS?
190
Feedback Requested: Code Editor and Stack Snippets
70
Let's rescue wayward resource requests! (trial run)
3
HTML/JS/CSS auto-surround?
120
What more can be done to prevent questions with just external links/images?