Can we have a tool for viewing posts we've down voted that were subsequently edited?

I came across this question on meta that talks about the barrage of down votes that posts can receive, which, after an edit or two become good questions and answers.

The problem exists however, that the voters will often never return to the post they voted on and their votes are subsequently reasonably unfair.

Is it unreasonable to have, as a privilege perhaps, a list of posts which I have voted on and which were then edited so that I can review my votes?

My initial thought of design would be similar to the review screens, where clicking any of the blue buttons removes the post from any sort of queue, not to be shown again until another edit is made.

This meta question outlines the same problem, but hinges on using DSE, which isn't possible as votes are anonymous. True, but votes are only anonymous publically. Votes are certainly attributed privately otherwise multiple votes would be possible and access to your votes tab on your profile would not.

I'd missed this post on SE meta and unfortunately it is status-declined but, reading through that page now, I can't find a clear answer why it was rejected. However, I'm encouraged by the proportion of users that support this idea. For just 402 views, 63 upvotes and 1 down vote. Perhaps this time, the SE team will be more accommodating.

1. Thanks for the extra reading ChrisF♦ :D

I think the main opposition to measures like these in the past was that the suggested UI would have been noisy and/or distracting to long time users.

I haven't been around that long, but I've already downvoted more than 500 posts, if I started getting inbox notifications each time one was edited I would find it irritating pretty quickly...

I would suggest adding an indication that the post was edited to the votes tab in the user activity tab. Something like: 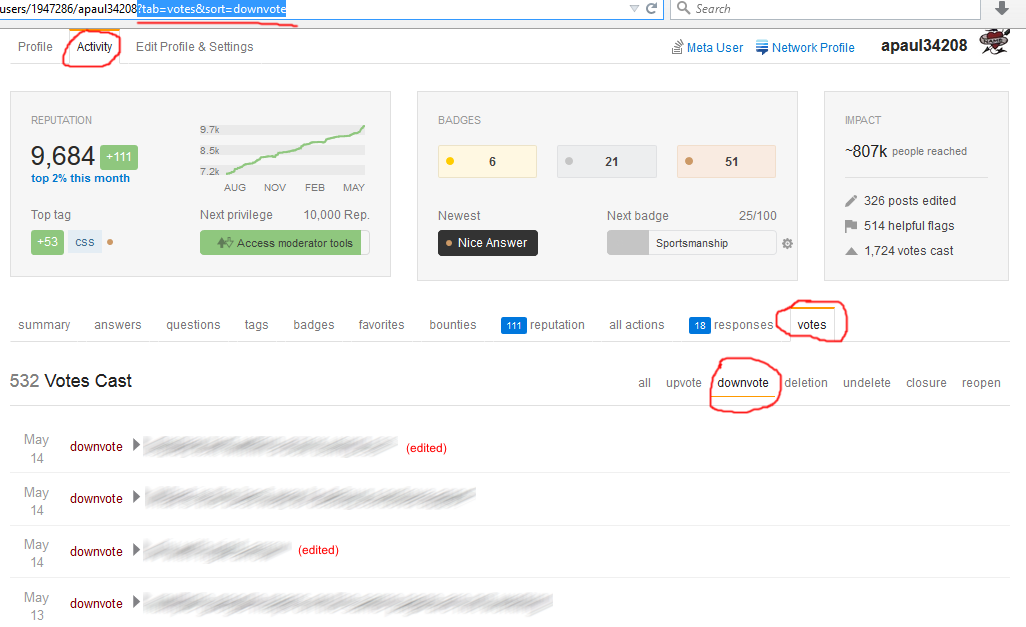 Just adding "(edited)" after the post link probably wouldn't require a huge amount of development time, it wouldn't be noisy, and it would allow users to easily check for edits on posts they downvoted.

This is the same kind of issue that triggered me to make a badge suggestion some time ago.

I suggested that there should be a badge for editing your own posts such that previous down-voters then changed their vote to an up-vote.

In the discussion that followed, it was also suggested that there should be a badge for changing your votes in light of good edits.

The suggestion was made quite a long time ago now. It got a lot of votes, but as far as I know it never went any further than that. But I do still feel that the behaviour I've described above is worth incentivizing, and badges would help to do that.

For those posts where I have any hope of redemption, I usually leave a comment describing what should be improved. I then periodically use the "all activities" view in my profile to find the questions I have commented upon.

apaul34208's idea would probably require one to search though pages and pages of downvotes.
It would at least have to be a list with the new edits on top.
But even such a list would probably be forgotten by most, and I think users should actively be made aware of such edits.

Now, you certainly can't receive an inbox alert for every edit on a post you downvoted, that would probably even overflow SO's database.
There's also users who save their edits every 10 seconds or so, who already make me mad when I'm reading their posts.

But if there was a way to tell relevant edits apart from irrelevant ones, then I think it would be reasonable to receive inbox notifications.

First, I think once a post has not been edited for a certain amount of time (I suggest 7 days), subsequent edits should never again trigger inbox notifications for downvoters.

Second, inbox notifications should not be triggered by edits themselves, but rather by the first vote on the post after an edit, if that vote is an upvote.

And third, if an edit should only be eligible to trigger inbox notifications if it changed a certain amount of characters (I suggest 100) and

This would lock away edits on old posts, minor edits, edits that expand bad posts with more (presumably bad) content instead of changing the existing one, and edits after which the post still receives downvotes.

A lot of edited-to-good posts would probably still be left out this way, but rather that than spamming users with notifications or not notifying them at all.

143
Notification on edit of downvoted content
57
How to know when a downvoted question has been improved?
26
Increase max daily votes?
-18
How to remove down votes?

62
Auto-comment close votes for all close reasons
21
How can I search only the posts that I voted on?
4
Is there a search tool to filter posts that have been edited?