Editing a question/answer is good, as far as it makes some sense and really improves the post. Reviewing a suggested edit is a responsibility and not just a matter of formality.

A single-character edit such as this suggested edit, which actually is just adding a question-mark is annoying and adds nothing. Moreover, it gets blindly approved without improving the edit.

For reference, this is the original question: https://stackoverflow.com/revisions/30023028/1 which had the scope of improvement like: 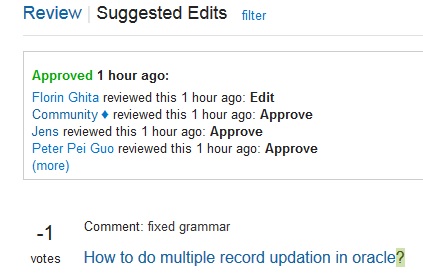 If you see, it first got approved by two reviewers, and then approved by Community. And what exactly was the suggested edit? A question mark was added to the topic title, and that's it!

There are following options:

If you do not see any scope to improve the edit, and that the suggested edit is trivial, then reject it.

Please do not blindly approve trivial suggested edits. Do something about it, if you find something could be done about it.

Update: Regarding a specific case when there is no scope of improving a suggested edit:

I understand when there is a single-character edit like adding a question-mark only is not going to harm the post and thus folks would just approve it.

But, wouldn't this encourage the editor to do such trivial edits in the future and then we would see a pile of posts in the Review stack for Suggested Edits. I wish the editor is made aware of it. As we don't know if this might be an attempt to gain the +2 reputation for getting a suggested edit approved.

So, the specific case in the update might be worth another discussion. However, regarding the original question, my opinion is that the review should have been to Improve Edit and not just Approved.

Edit: Regarding the question marked as duplicate

The duplicate marked question, "Too minor" edits - better to leave poor quality on the site? has a highest voted answer with a conclusion:

We should allow people to correct grammar and spelling mistakes. We don't have to be obsessive about it, but if someone is willing to spend the time for that kind of edit, let them.

Ok, correction of grammar and spelling mistakes is still improving something. However, as I posted an example about adding a question mark only to the topic title doesn't improve anything and simply approving the suggested edit is a poor judgement. If the suggested edit would have been correction of a spelling mistake, I would not have posted my question at all. So, I don't agree this is a duplicate question as we are addressing two different kinds of edits; I am concerned about addition a single-character, and the other question marked as duplicate addresses the modification.

Another question, When an edit only fixes a typo, what should I do as a reviewer? also talks about fixing a typo. As I said, my concern is not about fixing typos, or correcting spelling mistakes or grammar, but a single-character addition in the topic title and then being approved by the reviewers without improving the edit.

Update 2: Regarding the debate about the grammar

For those who think the edit to add a question-mark to original question (How to do multiple record updation in oracle) in the posted example is correct, then please understand that it actually makes it grammatically incorrect. Please read Why do my “How to” questions often get renamed to “How do I”?

NOTE: Reading the comments thoroughly, it seems that there might be a confusion between actually suggesting an edit versus approving the edit. Please see this original question, and then compare it with the edited question as it looks now. Please take some time to look at the edit history before making any opinion.

I completely agree with the downvotes, that it is a disagreement. However, it shouldn't be at the cost of misunderstanding. So, please look at the edits and updates to the question. I have tried my best to address each and every concern.

In my opinion, a single trailing question mark in the title is never worth an edit. Following the guidelines given in the MSE FAQ on good question titles (How do I write a good title?) the title should have received a complete rewording instead of an additional, redundant question mark. (Readers should be assumed to "understand your titles are questions.") So, yes, this edit adds no improvement whatsoever (and I would likely have rejected and edited it myself).

As for the too minor edits debate in general, I think especially new editors should be pointed more effectively (or more often, depending on the number of trivial edits they suggest) to the edit privilege description page:

Any time you feel you can make the post better, and are inclined to do so. Editing is encouraged!

Some common reasons to edit are:

Try to make the post substantively better when you edit, not just change a single character. Tiny, trivial edits are discouraged.

As a suggestion to raise both reviewer's and editor's awareness of the issue I have posted a suggestion that addresses the issue. It is intended to make reviewers think about their action by requiring them to tick a reason why the edit should be approved:

I partially agree with you.

In that specific question, I agree that the reviewer should have improved the edit because there are other things that should be improved.

If I came across similar question, that adding the question mark was the only improvement that should be done, I would have edited it. Hence, if I were reviewing a post that suggested the only available edit (which is, for example only adding a question mark), I will definitely approved it.

The purported justification for not allowing single-character and other trivial edits is that it makes unnecessary work for the review queue. It seems that the message hasn't got through to the review queue.

In fact there are many, many people ready and waiting to review trivial edits, and it then becomes necessary to forbid them from doing so, in case their willingness encourages the posting of such edits.

36
Should I approve edits that only add '?' to the question title?
17
Should I approve an edit that barely improves something
320
"Too minor" edits - better to leave poor quality on the site?
130
Fall 2015 Moderator Election Q&A - Question Collection
72
Is an answer that says that other answers are wrong not an answer?
42
When an edit only fixes a typo, what should I do as a reviewer?
43
Can we make approving suggested edits harder?
42
Encouraging attentive suggested edit reviewers to skip every uncontroversial review
4
Improve/edit answer with single character but critical

149
Don't allow suggested edits to be "finished" while someone has clicked "improve"
15
Suggested Edits: Make it clearer that non-trivial code edits are discouraged
43
Can we make approving suggested edits harder?
23
Should we approve suggested edits just removing [apple]?
16
When an edit is suggested on a post, is there a delay before it joins the peer review queue?