Close and Triage queues need a downvote option. No, really

I've been spending a lot of time in the close vote queue. I feel that there is a problem with the tools available to me there or in the triage queue. As a syllogism, er, wait, I have three premises:

This is inconvenient, because I have to step outside of the flow of the queue to Do the Right Thing.

This has also caused me to fail several review audits: I click Leave Open (because closing is not the proper action), and then I fail because people have closed the question for “too broad” (no! it's well-constrained!), “unclear what you're asking” (no! it's perfectly clear!), or “debugging must provide code” (no! they're not asking for debugging!). I'm aware that audits aren't perfect because they're automated, but this is a specific, frequent problem.

If I want to do the right thing even if others have not, and not fail audits, then my only option is to visit the question itself, downvote it, and then choose Skip as my queue action, which is also wrong because it's claiming that I haven't handled the question where I actually have.

The triage queue also has this problem: these questions are unsalvageable, but I can't say so without specifying a flag or close reason. (Triage has the prompt to upvote good questions, which also enables a downvote option, but it isn't available at the start.)

Anyone who's in these review queues is trying to sort the okay from the bad. As long as not all kinds of badness need closure, there should be an outlet for saying “this is bad in a downvote kind of way, not a close kind of way”. Therefore, the close and triage queues should offer downvoting as an option, despite that seeming not to the point.

The downvote button would have the effect of completing the review task (sort of like “I'm Done” gets enabled in First Posts/Late Answers), so effectively a “Leave Open” for close-voting purposes. (But unlike Leave Open, it wouldn't cause you to fail an audit on an actually-closed question.)

I understand your case for adding the button, so that when someone sees a bad question, their instinct is to take at least some action, so we provide them the correct action to take. However, these individuals are simply misunderstanding the purpose of triage, and are not using it correctly.

What if we did add Vote Up/Down as proposed

When you click vote up/down, what is supposed to happen? Are you done with the question then? You still haven't addressed the issue of whether the question meets the criteria of the close vote reason, which is the purpose of the queue.

Keving wants the down vote button as it allows feedback for questions where they should be left open, but he wants the option to downvote them. So do we assume a downvote means vote for Leave Open and skip to next question? Certainly some reviewers will downvote because its a bad question, but that doesn't mean they've thought carefully about the criteria of the close reason, so we certainly shouldn't automatically submit a Leave Open vote.

So you can't assume the vote for the close queue based on a down vote. This means after a downvote do we still leave the user on the question until they explicitly choose the close reason? If they were improperly choosing the close vote outcome before, they will probably still make the wrong decision.

If anything, it will be worse, because you are involving them in two orthogonal thought processes:

These two things sometimes go hand and hand, but as Kevin exemplifies in the premise of the question, they sometimes do not. A down vote does not necessarily mean a vote to close, but on the other hand it also does not always mean a vote to leave open.

This is exactly why triage is a focused process. Your mindset is not supposed to be on whether its a good or a bad question. It's supposed to be on whether or not the criteria for the close reason applies. Those sometimes go hand in hand, sometimes not. *Sometimes a really "good" question simply doesn't meet the site's criteria, and the purpose of the queue is to focus on the criteria of the close vote. If you want to vote up/down on questions, the close vote queue is not the place for that.

I disagree with this answer, because it's basically implying that I can't walk and chew gum at the same time - Jean-François Corbett

The premise of the question was that down votes should be added so that people who are currently choosing the wrong outcome will instead click the downvote. I framed my answer under that premise, and the proposed feature being unable to solve that problem. So if you disagree with that implication, then it is the premise of the question you disagree with.

A Better Meta Question Would not be a feature proposal, but a discussion post regarding the root problem, which is the failed audit where the asker believes they shouldn't have failed. This would allow everyone to brain storm on a better way to address the problem. My answer focused on why the proposed feature does not address the problem.

"Too Broad" is perfectly applicable to homework-dump questions (whether or not they are actually assignments in a class).

They're asking for the entire software lifecycle to be done for them -- requirements gathering, architecture, design, implementation, testing. Plus explanation of all the foregoing, since SO answers are expected to explain themselves. That's very broad.

Questions which ask for help with only one of the above, with clear and narrow scope, are fine, and don't need to be downvoted either.

I say yes, let's add those upvote/downvote buttons. Why?

Though the correct, intended primary action for a clearly worded, well-scoped "gimme the codes" question is arguably (and this is not the point I'm looking to argue):

there is nothing wrong with allowing the reviewer to also apply a correct, secondary action on the side, such as voting.

In fact, making it difficult (not impossible, just really, awkwardly difficult) for the reviewer to do what is right at the top of their mental stack when it is the glaringly appropriate thing to do is what I would call obstructionism.

In both these queues, we already allow such a secondary action, namely commenting. Are reviewers getting all confused by this? Would anyone argue that the option to comment is causing reviewers to make crazier decisions than otherwise? No! It works just fine and as intended.

Let's trust that reviewers can both walk toward the primary destination and chew gum at the same time.

* though I'll be the first to admit that I may have occasionally and completely accidentally hit the Close button on zero-effort questions. Whoops!

This has been implemented now. 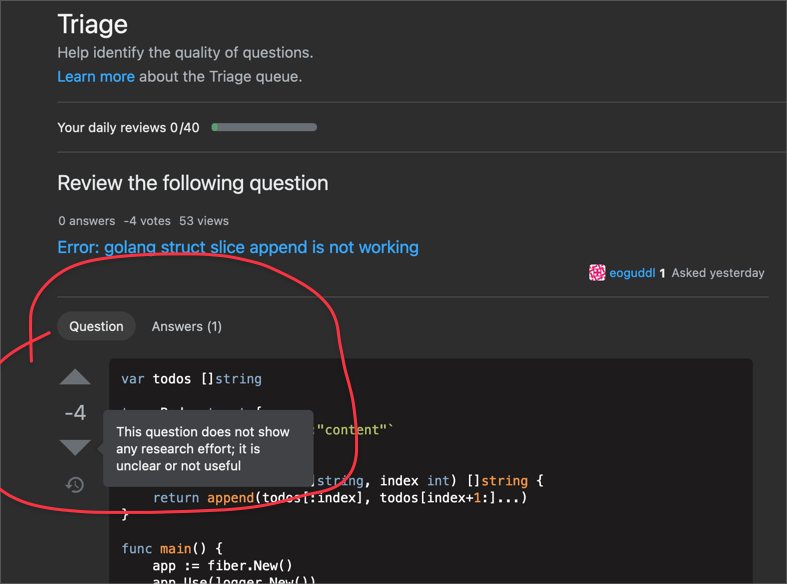 I don't know about the CV queue (obviously), but in Triage, Looks OK is in fact strictly the correct option when there's nothing to close it for. It is OK — there's nothing that can or should be done for it — it just isn't a good question.

Also, there's nothing wrong with Skip, even when it results in duplicate review handling. I would, however, recommend taking a policy of either a) keeping your audit radar up and opening suspiciously auditorious posts in a new tab to double-check or b) simply scrupulously posting whenever you get a bad audit. Either will avoid the problem of skipping all the things, and the latter has, I believe, been recommended by moderators at various times, although I strongly doubt anyone actually carries it out.

2
Shouldn't I be able to downvote in Triage?
1
Why can't we upvote or downvote questions in the Triage review queue?
537
There is no shame in using "Skip"
188
Declaring a Review strike until efficiency improvements are implemented
15
Add downvote capability to close review queue
15
Specific hard-to-review question

15
Add downvote capability to close review queue
19
Add close option to the "Help and Improvement" queue to avoid cluttering flags?
63
What's the point of the "Very low quality" flag action, in "Help and Improvement" reviews? Where's the downvote / close option?
30
Close Vote Review Queue audit on active bounty question
4
Why not merge Triage and First Post queues?
522
Triage needs to be fixed urgently, and users need to be notified upon receiving a review ban!
17
Provide an option to filter the triage queue by tags