This is not a question about the review queue overall, but rather a question on a particular "Are you paying attention" question. The question in question is this post on StackOverflow - Can't run unit tests in Bluemix Build & Deploy Pipeline because the servers can't connect to ClearDB MySQL

The answer that I rated was from user Brian Martin which has the response of the following:

Today, the build and deploy servers are limited on outbound connections to port 80 and 443. We are currently investigating if we can loosen this restriction on these build servers and still maintain the required security compliance. We recognize this is a big limitation that needs to be addressed. Thanks for your bug report.

To me, this does not sound spammy, it is not link only and it addresses the issue at hand with the question, it is not possible. After saying it looks OK, I failed the audit. 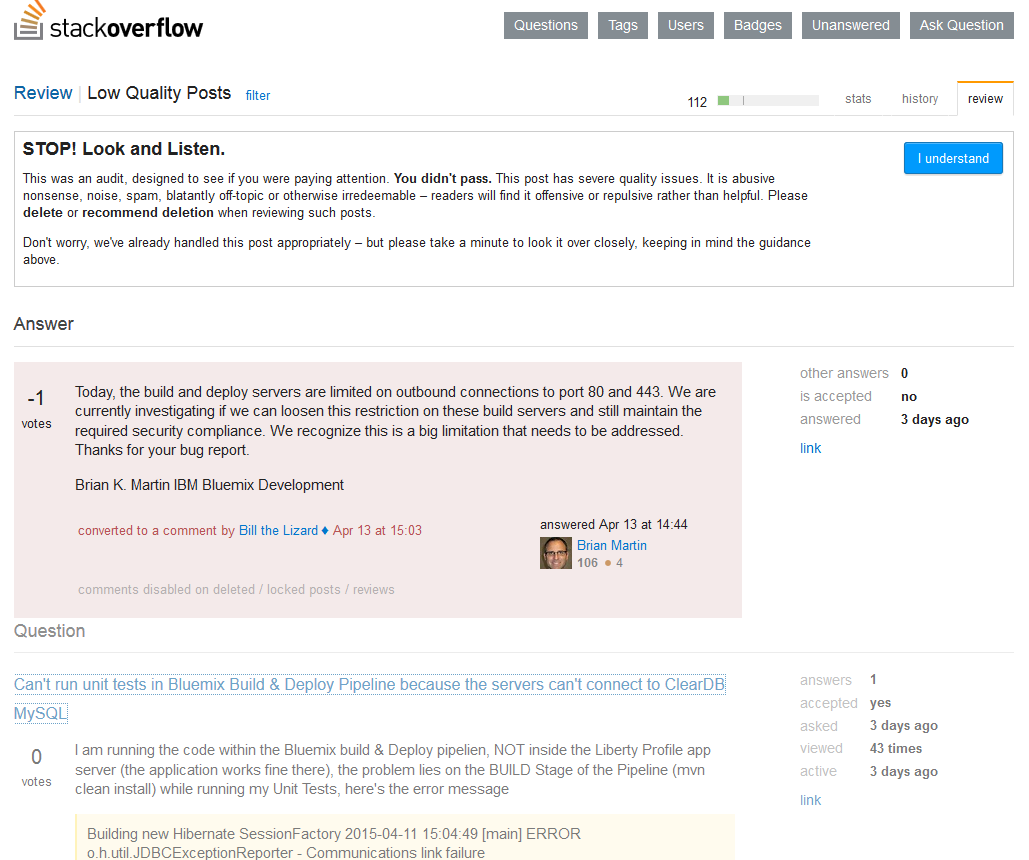 My issue is not that I failed the audit, but rather, if you look at the question and accepted answer, it is a verbatim copy of the answer that was marked for deletion. The accepted answer was also posted almost 3 hours later that our deleted answer.

Based on the evidence, is this a fair audit question? There are other questions surrounding this issue, such as should this have been deleted to start with, however, I am not attempting to call a moderator's decision into question, but rather, this answer seems to be a poor candidate for a review queue audit.

Marking that as spam was wrong; unfortunately it looks like the flag was approved by the mod converting to comment. Maybe the spam classification can be reversed; I'm not sure.

I'd say the conversion to comment was a fair move by Bill. The answer is not the ideal SO post; it seems to say "there's this problem with some server at the moment".

On the other hand, it's also apparently the only possible reply to the problem. (N.B. I have no knowledge of the tech involved.) Re-reading suggests that a change was made to some setting on the date of the answer, but that the change is semi-permanent. I'm not sure the question is close-worthy, because although it turns out to be just a bug report, no-one knows that when they have the problem. It also seems possible that another resolution will be found.*

The result of this square-peg-round-hole is a bad audit that falsely caught you. I think everyone did the best they could in this situation, including you; aside from getting the answer out of the audit list, I don't see anything more to be done.

*If the resolution turns out to be the service provider coming back and saying "fixed now!", it would probably make sense to close as "not reproducible" then, and direct the question towards removal as obsolete.

3
Review audit: Answer marked as spam, unclear why
12
Why does "convert to comment" validate SPAM / OFFENSIVE / VLQ - Flags?
1
Why did I fail this review audit when the answer seemed legit?