Unsplit Up/Down Votes after Splitting them

Is there a way to unsplit the up/down vote counts after splitting it. 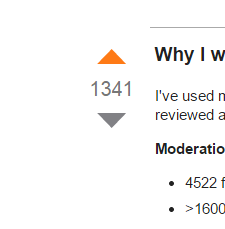 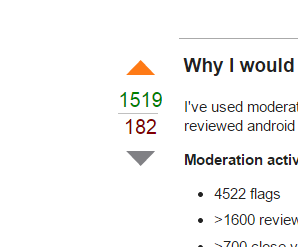 Only way i found now is refreshing the page. Is there any other way to do that?

I wrote some js which does it:

If you put javascript: then paste the code in your url bar, it'll replace the separated counts with the aggregated.

You could put it into a bookmark (which wouldn't really be easier than refreshing), or you might be able to use a browser extension to make it easier, but I don't know what you would use.

You know, then it screws other things up because the onclicks are then broken. It could be better, but it's something.

Yes, you can refresh the page.

Other than that there is no mechanism to "unsplit", nor do we see a reason to add such a mechanism.

Not the answer you're looking for? Browse other questions tagged discussion status-bydesign downvotes voting upvotes .

45
How can one do more than 40 down-votes per day?
22
Where can I find the amount of up & down votes that are recorded but not publicly visible?