So I saw this question earlier today: 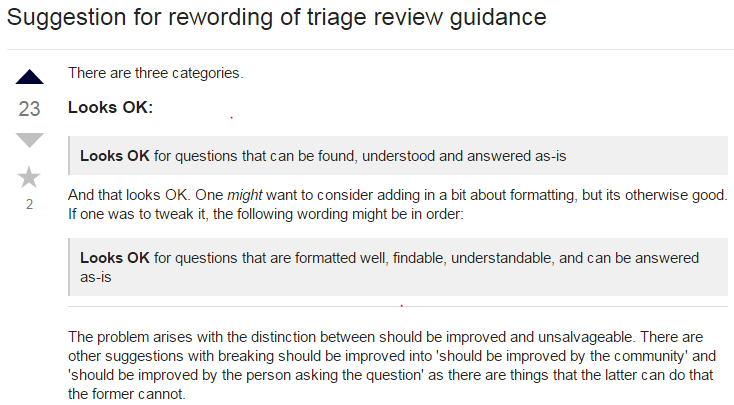 As you can see, it was a well recieved question asking for the Triage categories to be reworded.

My proposal, however, involves the flowchart that was in the question. It was made by Shog9♦ about 4 months ago:

It gives some great pointers for anyone who is reviewing questions in the Triage queue and I think it would be quite beneficial if a flowchart (preferrably a more detailed version) was added in the Triage section itself, just as a guide, to help achieve better reviews.

When Shog9♦ made this flowchart he warned this:

"...Just don't take this too seriously - you're better off using your own experience coupled with the guidelines given on the review page. If you're ever unsure, Skip and let someone else decide."

However I commented the following on the question I linked:

Evidently, at least 6 people were interested in my proposal (Otherwise I wouldn't have bothered asking this). I just wanted to know, who else thinks it would be a good idea to add a detailed flowchart in the Triage review just as a guide when reviewing?

Could we discuss why this would be a good or bad idea? What are the pros, what are the cons?

This is the way it would look (incorporating suggestions by @ryanyuyu and @JoshCaswell):

Also, as @MikeMcCaughan pointed out, the flowchart in my question doesn't include the Skip option. That's why I was proposing a "more detailed flowchart" to be added. I didn't really want to take it upon myself to create a better version because I'm still fairly new to this community and I don't feel like I have the required level of experience with reviewing posts in Triage.

With that said, if someone has a flowchart that they made, or use, already, it would be great if you could share it here, just as a guide for future readers or in the event that this feature-request actually gets completed.

The problem for me is that the triage page describes what the buttons are for, but not what they do. If my action is going to result in the post being flagged or closed, I want to know that, as it will help me make my decision. What I would like to see is this:

What happens to "Should be improved" questions in the Triage queue?

Unfortunately, it appears that imgur strips out the xml from 'png with xml' from a draw.io export. That makes me sad - it would have been too easy. So, its in a gist. You can import into draw.io with the raw content.

Yes, this is vertical rather than horizontal or other formats. And things overlap and aren't exactly centered. Those are minor details. I've reworded some of the decisions and added a skip... not sure where to make that more useful.

Thinking about it, might also have a duplicate check in there, but that might be a bit much for triage (a good duplicate close vote can take time and triage shouldn't take too much time).

This is a first pass and I would welcome comments and suggestions on how to modify and improve it (and as noted, the xml is available for people to grab and modify for more direct suggestions). This doesn't likely need to be perfect as Stack Exchange has graphic designers on staff, the likes of which make my feeble attempts at drawing look like a kindergartner's scrawling. If they can get the information, I'm sure they can do better... but I'll still try to make it something reasonable.

Not the answer you're looking for? Browse other questions tagged discussion feature-request review triage .

0
"Review Triage" screen should contain link to page which defines what a good question is and what is offtopic
333
Help us test question triage!
17
Increase reputation requirement for triage
48
Triage gray areas - what should we do when the question is borderline?
111
Suggestion for rewording of triage review guidance
37
What happens to "Should be improved" questions in the Triage queue?
-2
Integrate an online UML/diagram editor such as gliffy

11
Disable duplicate flagging in Triage
2
Is there a clear specification when a review item is either 'requires editing' or 'unsalvageable'?
84
What is the best Triage response for give me teh codez questions?
53
It seems many misunderstand the "Requires Editing" option in Triage review