Is there a limit to how many times a question can get sent back to Triage from H&I?

I suspect this is a duplicate but I haven't been able to find anything.

This is in regards to the "Low Quality" link from H&I, and this section in Shog's nice flowchart: 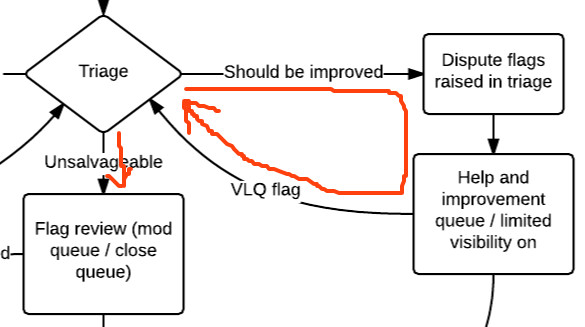 Is there a limit to the number of times a question can return to Triage from H&I (following the loop in that diagram)? If so, what happens when the limit is exceeded and "Low Quality" is clicked in H&I, is it just thrown to the Close Review queue?

The reason I ask is because when I come across categorically unsalvageable questions that made it to H&I from Triage, and I send them back to Triage, I imagine the possibility of them getting stuck in an endless loop if nobody ever explicitly ejects them from the loop by marking Unsalvageable in Triage (discussions of why this may happen are ongoing elsewhere).

There's actually two feedback loops in place now (or will be shortly).

The first is the VLQ flag that puts something from the helper queue back into Triage.

The second is something that runs to check for posts that came out of the helper queue, and subsequently went nowhere, then puts them back in the helper queue. By nowhere, I mean no up votes, no down votes, barely a few more views - just no activity. Crickets.

In both cases, it's only a matter of a few days normally until a question is no longer eligible to go back to either queue, so that in itself breaks the feedback loop. That's for now.

If you haven't noticed, the helper queue tends to have (at any given time) at most 30 - 50 questions in it. It's cleared like crazy, way beyond our expectations and for tag filtering to really work as intended there, we need more posts going in. We have some more data to gather, but we might be increasing the window that would permit posts into either queue. If we do that, then we might look at a more deliberate means of breaking the feedback loops.

But for now, it's not really needed, because things age out quickly enough.

48
Triage gray areas - what should we do when the question is borderline?
2
From a question page, can I see the triage review outcome (if any)?
18
Are reviewers affected when a number of posts they send to H & I go back to Triage?
2
How is Triage time limit calculated?
18
Why is there a limit on how many Triage questions I can review?
4
How can I check how many times I've been suspended?