There's one advertisement that frequently appears in the right margin of Stack Overflow pages, that I find annoying and distracting. Does anyone else feel the same way? 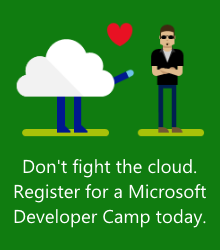 The advertisement in question is for a Microsoft Developer Camp. It has a man with his arms folded. To the left of the man, there is a large cloud with a huge blue erect penis, and a love heart above the penis.

Have I misunderstood this advertisement? Just what is it trying to tell me?

If I want to see cartoon pornography, I know how to find it. Having it thrust at me on Stack Overflow is frankly a little disturbing.

Fret not, @DavidWallace! There is a feature on all leaderboard and sidebar ad units that allows you to downvote an ad. You can provide one of five reasons (uninteresting, misleading, offensive, repetitive, other), and upon doing so, you will not be served that ad again-- unless you clear your cookies or browse from another platform. 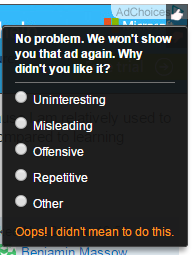 All you have to do is hover over an ad that you find objectionable and click the downvote button. Easy, right?

Remember: we only want you to see ads that are relevant to you. If you don't like what you're seeing, this should help.

You're certainly not the first to discover logos that have unintentional, hidden meanings.

If you click through to the article I linked, you'll notice quite a few gems. Be forewarned that some are jaw-droppingly bad.

The only two of the fifteen that are safely linkable here are:

and the Sinister Sherwin Williams

What's worth pointing out in cases like this is that the innuendo likely wasn't intended. All but one of those logos were for legitimate corporations whose brand image would have been significantly tarnished by an intentionally offensive logo.

So to answer your question:

I'm not sure that I'd chose "annoyed" as my feeling. It's certainly off-putting though. And it's clear that the advertisement is not having the intended effect that it's supposed to.

Unintentional gaffes like this happen on a semi-regular basis. The important thing to do is not get overly upset about them, and politely point out the mistake to those who can actually do something about it.

159
Fist Bumps and Teams: What's going on with this ad?
44
Should questions destroyed as being offensive be used as review audits?
69
“Report this ad” does not rotate ads (Or: Can we have ads that don't have faces staring back at us?)
24
Azure ad causing excessive warnings
33
Microsoft Azure support team redirecting off-topic support requests to Stack Overflow