On an answer with 3 or more downvotes, the flag window is semi-transparent, like the answer, which makes the flag options hard to read and select: 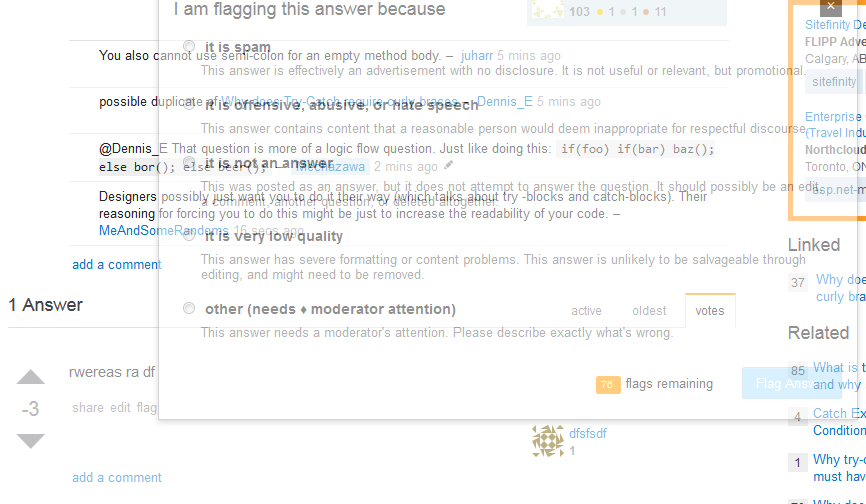 The problem is also visible with the share window (which also seems to appear below "Your Answer"):

I have pushed a fix for this to dev. It will be on live after our next build. Thank you those who suggested solutions.

Either the modal needs to be appended to a different element, or the css opacity needs to only target the votecell and the post-text elements. 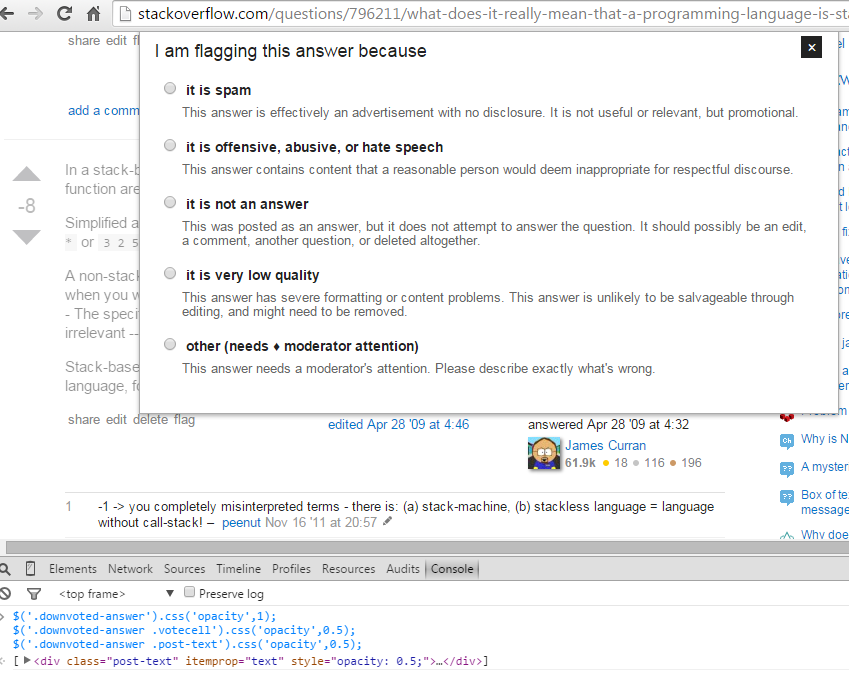 As an alternative to Travis' answer, I've got a suggestion that isn't a convenient way to approach this sort of thing, but I think it's worth considering.

Following up on my old answer, I figured there ought to be a better way to fallback gracefully for older browsers. The first thing that I thought of was: detect browser support for pointer-events and then adjust some CSS accordingly. However, I found that it can be done a lot easier with some z-index fun.

The idea is, again, to add an overlay to the downvoted answer with a pseudo element :after. With the pointer-events: none; property, clicks will fall through that overlay so users will still be able to select text or click the Flag, Edit and Share buttons. However, this property isn't supported in older IE and so users won't be able to click these buttons in such browsers. The solution utilises the simple yet efficient power of z-index. Simply position the div that contains those buttons (.post-menu) relatively, and add a z-index that's higher than the z-index of the overlay. Ta-da, now everyone can click those buttons.

See the CodePen here, or the fullscreen demo here.

Downside - Doesn't work well in all browsers (see below)

Basically what you do is creating an overlay with a pseudo-element, and let pointer events "fall through" by setting its pointer-events property to none. Unfortunately this isn't widely supported, though IE 11 supports it. (It's something.) Also consider that even though IE 8 supports :after, it doesn't support RGBA. A better approach, then, might be to use (a form of) opacity, like so.

I do wonder, though, why don't you use one pop-up per page? Now each answer has its own pop-up div, but why don't you simply have one pop-up element at the bottom of the DOM which you only fill with the relevant content upon click?

67
"Vote down requires 125 reputation" on answers with -7 votes or less behind the code snippet
1
Answer Text Field Blocks Flagging Modal on Downvoted/Greyed out Answers
17
Comment flag window for transparent answer hidden behind new answer box
16
The flag dialog for a comment on a downvoted answer is transparent
11
When flagging a comment on a heavily downvoted answer, the flag box is translucent
3
Recent Change to Transparent Overlay of Downvoted Answers?