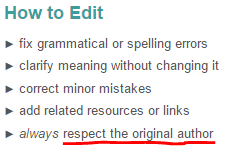 4
When is it appropriate to change the title of a question?
17
Is it ok to totally rewrite somebody else question?
88
How can I revive a long-dead question?
75
Why was this answer heavily edited, and should it be reverted?
68
Updating old, high voted answer as recommended code changes
57
Does this edit change the meaning of the answer?
32
Ask the owner of a post whether they agree with an edit
43
Should I improve/rewrite an existing, unanswered question or ask my own near-duplicate?
47
Should a suggested edit which adds new content to an old answer with good upvotes be approved?
47
Is it wrong to suggest to a commenter to edit my answer?
See more linked questions

4
At what point is an edit considered "changing the answer"?
53
Should "Edit:" in edits be discouraged?
29
Does adding a requirement to a question "deviates from the original intent of the post"?
3
Edit an answer to make a correction, or post a new answer?
57
Does this edit change the meaning of the answer?
31
Is it acceptable to edit answer by giving the newer version of a deprecated function?
49
What exactly is the term "new-user" referring to?