There seems to be now be an implicit license for "gimme codez" questions like https://stackoverflow.com/questions/29083134 and associated reputation gains for cheap answers to such questions. Is this what Stack Overflow wishes to be known for? I didn't bother to search for answers on Meta Stack Exchange so please just gimme me an answer.

Okay, I did search for policy on such matters, but I can't seem to find anything more recent than Encouraging users to try something before asking "Write me code that..." questions on Stack Overflow which itself is vastly more permissive than the older What site to use if you have a "gimme teh codez" question?

Does anyone have pointers to policy that I missed? If my anecdotal view of the current norms is correct, then the purpose of this site has changed, and I can ignore it in good conscience.

There is a fundamental flaw with the Stack Overflow model, in that the 'benefit' for helping out is reputation. People will chase reputation, because pretty fundamentally - that's the point of it being there. But as reputation drives behaviour, it doesn't necessarily drive the right behaviour.

closing a bad question doesn't yield rep. Answering it (then voting to close) probably will.

Indeed, given my (albeit limited) scope - high scoring answers tend to be on simpler questions because:

Reputation doesn't scale for 'good' or 'bad' questions. There's no (direct) penalty for answers to 'gimme codez' questions. Worst case - you spend a few minutes knocking something together, and you lose the (small amount) of rep if and when it ever gets deleted.

I think the answer really has to be a bit of a rethink to the reward model. Perhaps something as simple as reward scaling, that requires a question to have a higher-than-zero ( >1 maybe?) score in order to be eligible for upvote bonuses?

And for a really good question - one that's not had many answers - perhaps a bonus to encourage people to take the time. (Above and beyond that offered by 'bounties').

Is it encouraged? Absolutely not. Does it happen? Of course, we can't always moderate fast enough.

Do note that the expected answer to many Stack Overflow questions is code that performs some function (along with an explanation of course), we just want to take care that the question is of high quality and not just "Give me code that does X".

This behavior - "code-begging" - used to really annoy me on forums and mailing lists, because you'd put the time into answering one of these and... Your work would sink beneath the waves forever. You were, by and large, writing for the benefit of one person - so wanting to make sure that they deserved the effort is pretty fair. Not that you really could - generally, the best you could hope for is someone who'd at least respond and let you know that your answer worked before you and everyone else forgot about it forever.

Yeah, forums were pretty broken for this sorta thing. But that's why Stack Overflow was created in the first place...

See, you are not at the mercy of the asker here. Even if they take your answer and disappear forever, your answer sticks around to help the next person with the same problem. The first person to ask for code to do X could be a lazy, no-good resume-padding ingrate, and it still doesn't matter - your answer is still there for everyone else who might need to do X, most of whom will also be lazy ingrates because they come from The Internet and that's what Internet People are like but... You'll get a few who aren't, a few for whom your answer will make a difference, a few who'll give back when the tables are turned and they find themselves possessing unique knowledge of how to do Y...

...and that's how Stack Overflow works.

When I first learned to program, I saved for probably a month to buy a crappy copy of Turbo C. I read the worthless book that came with it, the (actually quite good) online documentation, and in another month I'd managed to become... a really lousy C programmer. Then I found my way onto the 'Net, and all the open source I could eat. And for the next few years, I downloaded and read and learned... Eventually, I started answering others' programming questions - not because they deserved it, but because I didn't deserve any of the education I got, and yet it was freely-given anyway.

A good many of these questions - like your example - have other problems: they're unclear, they're impossibly broad, they're duplicates... But in the absence of all of that, if the worst you can say about a given question is, "I don't think the asker deserves code" then... Stop caring about the asker. They may be a spoiled kid like I used to be, but that doesn't mean only such characters will benefit from your work - if you desire to write, then write, write for the ages and write for the masses, and sooner or later someone will appreciate the lessons you've taught.

You're running into the issue that SE is a site that has very few rules. It has lots of guidelines.

You'll constantly see people violating site guidelines, for any number of reasons. Whether it's a good thing is of course something to be evaluated on a case by case basis.

I think it's important to note that there's a difference between "write some code for me" and "what code can I use to do this one specific thing?" As long as the questions are appropriately scoped (e.g. such that it's likely other people will encounter the same problem in the future), I don't see a problem.

I'm going to agree with Servy here in saying that this is something that should "be evaluated on a case by case basis." Vote up the useful questions, vote down the not-so-useful questions, and vote to close the questions that are too broad or unclear.

To answer the question in the title:

Now the voting is extreme thanks to the meta effect, but clearly people don't like these questions. By why not?

They violate a sense of professionalism.

I think we all have been in the situation where someone finds out that we work with computers and asks us to fix their laptop or whatever. If it's someone you care about, you'll probably do what you can to help. But it seems rude for someone you just met to ask you to do pro bono work. Same thing applies on Stack Overflow except everyone is a stranger. Programmers spend countless hours tinkering with code in order to be able to solve little problems like this. So it feels like the asker is cheating if they get a solution without struggle.

The second point gets overlooked. The user who asked the question you pointed to won't be able to ask questions anytime soon because of the downvotes they've received. We've been working to make an even better system with the Triage Queue. Many low quality questions don't get to the homepage until they are vetted. (Unfortunately, people looking to answer questions aren't using the homepage as much as we thought they did. So low quality questions still show up for most of our users. We probably need to fix that.)

A caution against anecdotal evidence

We find reports like yours very useful because they help us improve Stack Overflow. But it's helpful to look at data too. I've been fooled by my subjective impressions too many times to not look at the data. Here's how many questions are asked, closed and deleted each week: 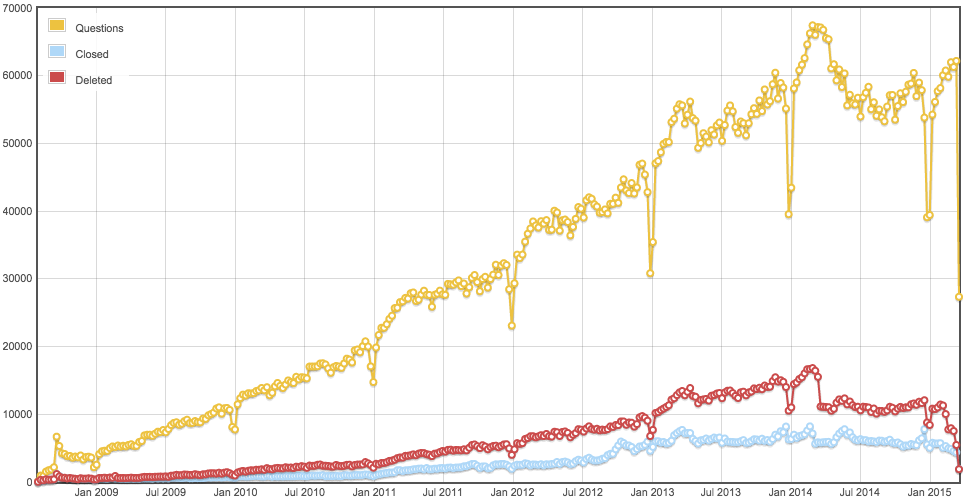 To heed my own advice, I should probably look at the data. Unfortunately, it's hard to detect these sorts of questions automatically. That's one of the reasons we have voting on questions.

I agree with a lot of what has been said already but I wanted to add that SO is a system and we participate in it by choice. One day might be a "I just feel like coding" day, another might be "I feel like educating this person on the guidelines" day. Just fill the role you feel like filling in the moment and let someone else do the other.

In saying that it is a system I would like to draw attention to the review queues. by participating in this way, I have learned more about what makes a good question and more about how to separate the good from the bad. and I'm still learning.

I'm constantly amazed at the number of people who seem to consider that (their or other people's?) behaviour is driven by reputation brownie points. I would have hoped that as professionals we were above such things.

When I respond to a question I do it the same way as when someone stops me on the street and asks for directions. I'll give the best advice I can in the time available. I will only make a detour to take them to their destination if I think it will be an interesting diversion (for me): normally I'll just point them in the right direction and encourage them to find their own way. All the time, I'm thinking that my purpose is not just to help them solve their immediate problem, but to encourage them to improve their skills and become more able to help themselves (and others) in the future.

I don't approve of voting down the question. I do approve of answering it in a way that encourages people to do their own research either before or after asking it, and I'm disappointed when people respond with a yard of uncommented code that won't teach them anything.

11
Should I be answering 'code requests'?
333
Help us test question triage!
557
Should we add a "Do my work for me" close reason?
421
The Stack Overflow homepage is over-emphasizing bad questions (and a proposed solution)
232
Allow users to optionally filter out low-quality questions
152
Could some bad questions be avoided with additional prompting?
145
Should one advise on off-topic questions?
108
The Good, The Bad & The Ugly
92
Feedback requested: New "recommended" homepage, phase 3 - algorithm tweaks
11
How to deal appropriately with answers posted for obvious help vampire questions?
See more linked questions

43
Should I edit titles which have nothing to do with the actual problem?
48
Is there really a universal code requirement?
4
Is it fair to use ironic comments on "gimme codez" questions?
239
Make it easier to close job shop "gimme teh codez" questions
59
Request for official policy of implementation of section (4)(c)(iii) of CC BY-SA 3.0 regarding comments
4
How should we handle "weasel words", or unintentionally broad questions that aren't?