Why do we punish harsh comments and not lazy questions?

It seems that we are gradually removing the ability of long standing users to actively maintain the culture and communication of Stack Overflow in favour of new users who do not respect the culture of high quality questions and answers. It's starting to get to me. 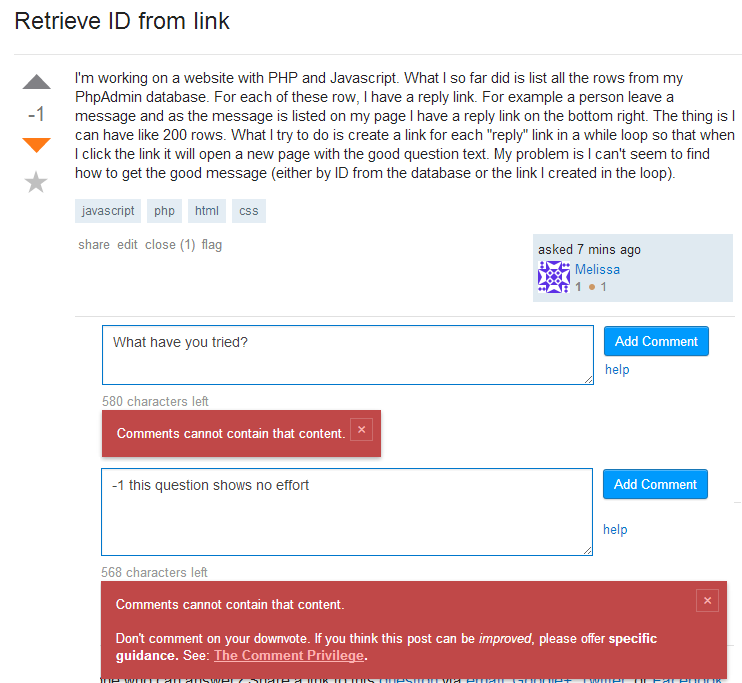 So the question remains, why is the Stack Overflow staff so hellbent on punishing long standing users who effectively act as free staff who moderate the site, when new low effort questions keep flooding in?

Search is getting good enough and space is getting cheap enough that good moderation isn't as necessary as it once was.

What is my incentive to help Stack Overflow, when they seem to remove everything I liked about it?

Stack Overflow is a question and answer site for professional and enthusiast programmers. It's built and run by you as part of the Stack Exchange network of Q&A sites. With your help, we're working together to build a library of detailed answers to every question about programming.

Except now low quality questions from people who show no enthusiasm are welcomed. I'm not even concerned about professionalism, I'd just like a little enthusiasm. When you put in zero code into your question, that's not enthusiastic.

And its not run by us, as changes (like the dreaded and much protested removal of +1 comments) are unilaterally put in place.

So in summary, why does Stack Overflow keep forcing kid gloves on long-standing users at the protection of new users who show zero interest in the site?

Specifically, why do we support help vampires by allowing them to come along, ask their question, get an answer from some repfarmer, and then shuffle along their way.

Why can't we retain the harsh gatekeepers of old that actually encouraged high quality work?

edit: True to form, in the time it took to write this rant the question I captured has been answered: How retrieve ID from link?

Why do we punish harsh comments and not lazy questions?

This whole question is just... laughable.

Downvotes have an in-built meaning associated with them:

This question does not show any research effort; it is unclear or not useful

You're adding useless noise to the site by duplicating that comment. Don't do that. Such comments should be flagged as the noise they are, and deleted. Stop adding to the problem. Nobody is "punishing" you because you weren't allowed to leave a bad comment, that's asinine. How could you possibly spin that to be a "punishment" against you?

So the question remains, why is the StackOverflow staff so hellbent on punishing long standing users who effectively act as free staff who moderate the site, when new low effort questions keep flooding in?

That is a laughable interpretation of what is going on here.

Don't post bad comments, that's it. Nobody downvoted you, you didn't lose any rep, you were prevented from taking an action that would have negatively impacted the signal:noise ratio of the site.

So in summary, why does StackOverflow keep forcing kid gloves on long-standing users

Seriously, because you couldn't down-vote and leave a -1 i downvoted this comment?

This question is crazy.

We punish lazy questions with downvotes and closure (and even deletion). You know, things that actually lead towards a question-ban. In fact, we do it so well that those users complain about it here on Meta (ironically enough).

We hardly punish harsh comments at all. Be egregious enough and you can get put in the penalty box, thats about it. Otherwise the worst thing that can happen is you can't post the comment or it gets deleted. Thats not "punishment" in any sense of the word.

Also remember that, due to community feedback, you can leave "-1" or "+1" in your comment, you just have to include a detailed explanation (not just "What have you tried" which doesn't really help anyone).

And beyond the signal:noise ratio, which this is trying to improve, we also do need to realize that there are actual people on the other end. While I am in no way suggesting compromising the quality of the site, treating other users with respect while cleaning up their garbage is still very important. Some of the restrictions (like the one on LMGTFY) are due in large part to that (plus those comments just not being constructive at all).

You can 'punish' a bad question.

The best way to do so is by downvoting it.

-1 this question shows no effort

Doesn't tell the OP how to fix the issue. "Show effort"? Some of the best questions don't show any effort.

If you're leaving a comment for the OP, make it actionable. How could they show more effort? What could they do to get a +1 from you? Telling them you downvoted and they should show effort makes the comment about the downvote, and not about the reason you downvoted. Better to just downvote, and if you're going to leave a comment, make it actionable.

Similarly, "What have you tried"? doesn't help anyone. At best they'll respond to you in the comments (instead of the question), and sometimes, they shouldn't try anything (see the answer I linked to).

A better thing to do would be to tell the OP what's missing:

"From what you've written, I don't have x, y, and z, that I need to be able to solve your issue; if you edit your question with (a, b, and c) it'll help us answer you."

If you're going to leave a comment; make it actionable. Those comments aren't allowed because they're not actionable.

now low quality questions from people who show no enthusiam are welcomed.

We welcome them with a full embrace of throttling, banning, and downvotes.

Can you imagine if this happened to "harsh"1 comments? If we truly punished them the poster would receive a comment throttle, negative reputation, and perhaps even a comment ban. But we don't, we just slap you with a small red styled element that essentially asks you to rephrase. What a harsh punishment that is.

1. Harsh: Cruel or severe. I personally do not think -1 or What have you tried? are harsh. However, they have been deemed to be counterproductive and that is where the prevention comes from. In my opinion, harsh comments would be more along the lines of direct insults or ad hominem attacks.

243
Am I still supposed to explain my downvotes or not?
25
When/Why a question with accepted answer and more answers is deleted?
-232
Should we discourage leading +/-1 on comments?

63
Meta-meta: why is meta full of close-warriors?
6
Why aren't you asking more Questions?
32
Do we need to rethink, clarify criteria for burnination?
46
Let's talk about my (canned) comments for bad questions by New Contributors
33
Should Stack Overflow users enforce a mandate or let the site evolve?
38
Posting questions about obscure tech if they may not get answers except from official reps