The blind leading the blind [closed]

Of late (past 3 months, perhaps) I feel I'm noticing an increasing tendency for newbie questions to be answered more by newbies than by experienced developers. To an extent this is goodness, but when the answers contain serious errors and they're not corrected (which often the case) it would seem to be a problem.

It might just be my personal perception, of course -- has anyone else noticed this?

Going from the rounded version of the query that I mentioned in the comments... I present you a chart of the sum of the questions asked by users less than 200 reputation where the highest rep answer is from a user on the X axis... 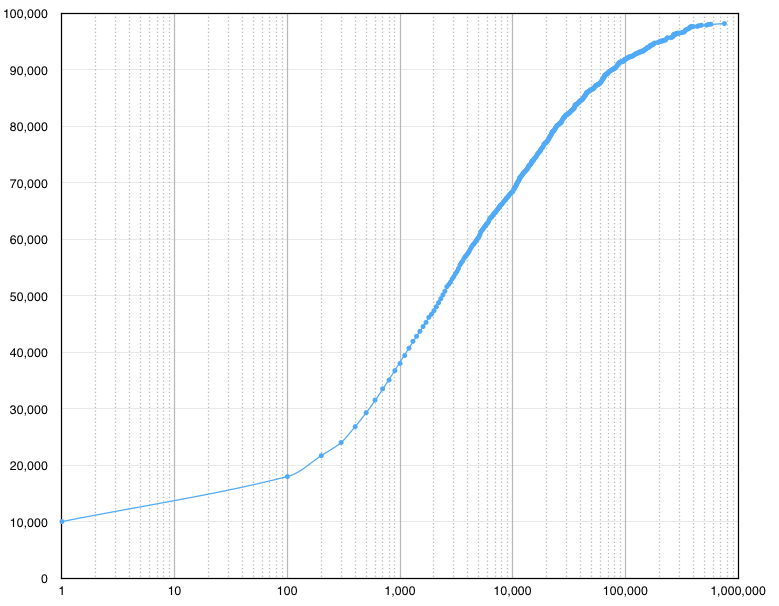 There were about 100k questions asked (98167) by users in the category in the month of January 2015. The median for this graph is in the 2300 rep bucket. Half the answers were from users with more than this rep, half with lower.

I will point out that digging into too far in history will cause issues with the gradual accrual of data. It is non-trivial to determine what the reputation of someone in the past would be. That is why this is for the month of January which isn't too much older than the data dump itself.

As this is working with rounded data, that gap between 1 and 100 is kind of stark, but without digging into more powerful tools, I'd rather work with ~800 rows than... a much larger number.

There is a flaw in this query in that reputation doesn't necessarily correspond to skill. An approach to modify the query to. Another approach to try to refine this (with more subqueries) would be to instead of ranking users based on reputation, rank users by the mean (or better yet, the inter quartile mean of answer scores.

This would partially address two flaws in the query above:

173
Meta hasn't changed at all
1
What to do about the flood of low-quality (homework) questions on Stack Overflow?
116
Feedback on the Comment Classifier blog post
178
The Code of Conduct is a “no moderation” pass? Not on our watch! What can we do?
144
Does the company still want this to be a library of knowledge?
51
Create a separate, independent Advanced SO focusing on being a knowledge library (but still part of the network)