What classes this as a question?

Last week I found this 'question', which isn't a question at all as it doesn't actually have a question in it: 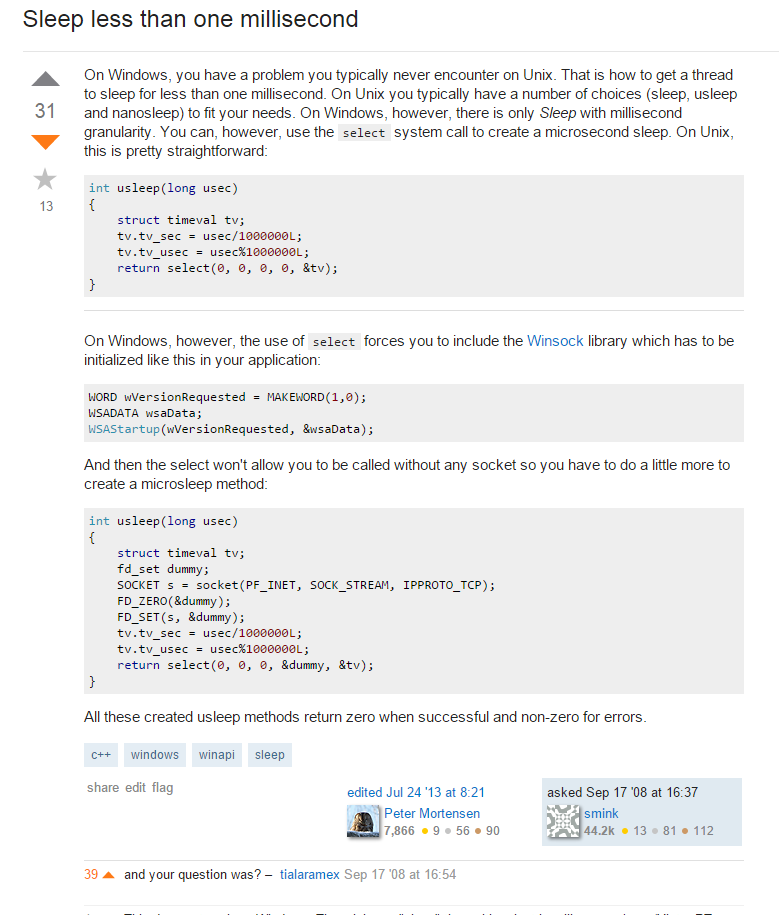 It's more of an attempt to provide a solution for sleeping a process for less than one millisecond, but it's still not a question. I discussed this question on the SO Tavern Chat and the users that were in there at the time agreed with me that the question should be VTC'd as 'Unclear what you're asking'.

However I also thought that as the post is of high-quality, it's not fair to close it and potentially delete it; instead I thought that it should be locked instead, and so I raised a custom flag.

Unfortunately the moderator who reviewed it didn't agree to this, nor did they agree that the question should be closed:

The moderator's response was:

I don't think this needs to be closed at all.

..implying that they do not think there's anything wrong with the question, why?

This question isn't a question, it shouldn't be open (in my opinion) and I'm surprised it's lasted as long as it has.

I've edited the question to remove the answer and did change the style a little bit so it reads as a question.

The question was self answered by the OP. I edited that answer as well.

After my edit doc edited the title into shape.

We now have a perfect question with a lot of upvotes that is relevant and clear for future readers.

There is indeed no need for this question to be closed. If a question is salvageable by editing please do. Downvoting, flagging and closing is only for posts that have no value now or in the future.

This is absolutely a question. It even has a title that already makes it very clear what the question is: "Sleep less than one millisecond". While it doesn't end in a question mark, it's a clear problem statement. And it's actually much more reader friendly than the more verbose "How do you sleep less than one millisecond?", which adds nothing useful.

If the title is not enough, the problem statement is repeated in the first sentence (emphasis added):

On Windows, you have a problem you typically never encounter on Unix. That is how to get a thread to sleep for less than one millisecond.

I see nothing wrong with the way this question was asked.

Not the answer you're looking for? Browse other questions tagged discussion questions unclear .

23
Is this (another) good review audit question?
26
What should we do with this JavaScript code coverage question?
29
What should be done with these two historically locked [copyright] questions?
55
Can we rescue the information in this question somehow?
2
Is this really a “bad” question?
11
What to do with this very old off-topic question?
10
What to do about tags for classes and methods?
18
Shell scripting question closed and locked