For how long are we allowed to use sandboxes for new features?

In the past few days I've posted a (now undeleted) answer to Stack Snippets Sandbox - Try It Out Here! 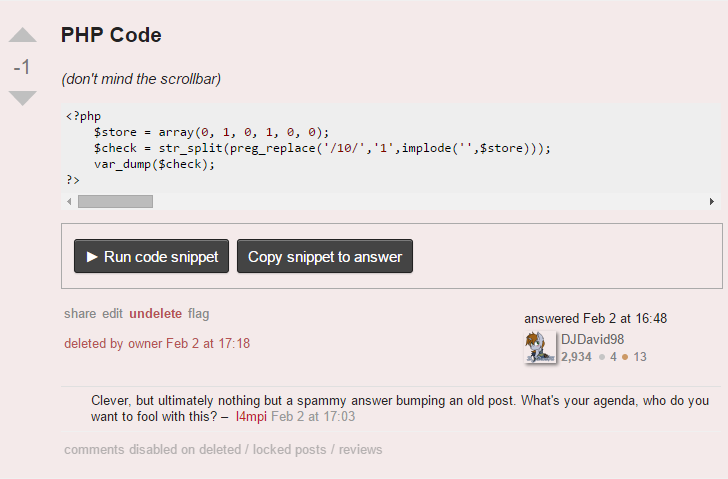 Here's a copy-paste of the snippet for the curious:

To my understanding, the sandbox can be used to try out the feature indefinitely, but I was told by the commenter that it's a "spammy answer bumping an old post". All I wanted to do was link the answer in my profile.

So my question is, what's the general time limit we are allowed to use past and future sandboxes for that pop up for new features? Does posting an answer so late count as spam and should be nuked on sight?

It's a sandbox. Play in it.

There's no sense in yelling at people that play in it, regardless of when it was put there.

To that point, Stack Snippets don't support PHP, and the hope/intent is that you're using that particular sandbox to test Stack Snippets instead of putting just...whatever in there.

My guess is that the person felt that you were taking advantage of the sandbox with some PHP-looking code instead of actually testing the functionality, and that's a fair complaint; I wouldn't appreciate it if you threw that up there without exploring what the actual feature was. Of course, had they looked at the actual JavaScript to the right...

I wouldn't have commented in it being an old post or it being spammy; I'd probably comment to the effect of it not being clear as to what you're actually doing with it. It wouldn't make sense for me to suddenly throw some Java in a snippet to "test" it, nor would I anticipate that it would be well received, either.

2
How do I apply a license to the code in dozens of my old posts?
104
New SO <meta> tags are too long for Google
33
Seeking Canonical: Non-returning PHP Recursion