+100 trusted reputation on the site which reached the threshold

Today I asked a question and got 2 downvotes. However, I saw an increase of 596 total reputation in the upper bar. That is 6*100 points for "trusted on other sites" minus 4 for the downvotes. So far, so good.

However, I had 193 reputation on Stack Overflow before and there is no site where I actually reached the necessary 200 reputation which would give me the +100 trust bonus.

The only explanation to me is: someone accidentally upvoted, which gave +10, soo I reached 203 reputation, thus triggering the trust bonus update. Then, he removed that vote, so I went back to 193.

Then, the trust bonus calculator ran asynchronously and went through all accounts that have less than 200 reputation, which applies to all my accounts, including Stack Overflow.

IMHO, the account that triggers the trust bonus should be excluded from receiving the bonus, which is not the case for me: 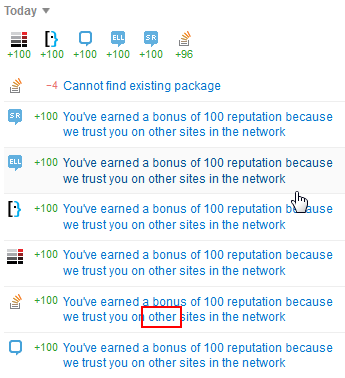 If someone could just upvote one of my questions again and then remove the upvote, maybe we'd see that same thing again.

And if a moderator would correct that undeserved reputation, please... (At the time of writing I have 289 points on Stack Overflow, which should be 189 instead)

My focus is on the word "other" in the description, because Stack Overflow is not an "other" site, but the site which triggered the bonus.

Also the question Award account association bonus automatically upon reaching 200 rep talks about "linked-to account", which I read as excluding.

Third, the accepted answer why is my rep so low? claims the same.

So, the common understanding seems to be that you get the bonus only on other sites.

There is nothing to correct here.

You reached the required trigger level, 200 points or more, fair and square. You may have reached it only briefly but you did so long enough for the system to determine that you were due the bonus.

The bonus applies to all your accounts, including the account that crossed the 200 point threshold. You've shown that you have enough experience with Stack Exchange sites that you deserved to have access to a basic set of functionality across all sites, plus a little 'thank you' for using more than one site in the network.

Besides, why would other accounts suddenly have more reputation than the one that earned you the bonus?

Also see Should the Association Bonus be given to the account crossing 200 rep?

The only confusion here is the word other; the message is re-used for all accounts, including the original one. I'd not worry about it, that's just the developers being lazy and keeping things simple. Would a different message have made much of a difference here?