Why can't I upvote the regex reference question?

I just recently became aware of the existence of Reference - What does this regex mean? and its related meta question). "Oh, wow," I thought, "that looks like a useful question! Let me upvote it..." 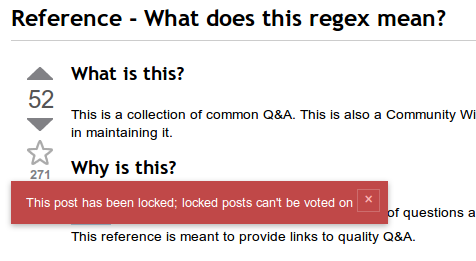 Apparently, the reason I can't do that is because the question has been locked:

This question's answer is a collaborative effort: if you see something that can be improved, just edit to improve it! No additional answers can be added here

This seems sensible... except that it also blocks voting and commenting on the question. It also doesn't look like anyone ever even tried to add a second answer (not that there ever was much of an opportunity, as the question was locked less than 6 hours after it was asked).

OK, so I could still upvote the answer to that question (which currently stands at 216 votes, versus the question's 52). But it was the question that I originally came across in the search results, and I'd rather like to upvote it, in order to see it rank higher there.

130
Regex reference and its fate
22
Historical lock for "barriers to understanding pointers"?
14
Why can't I up-vote a locked question?

130
Regex reference and its fate
17
Can you see the voting history of a question / answer
87
Why did this unupvote/upvote result in a gain of +10 reputation?