Strange problem with whitespaces in code/question

In the source, it appears that both strings contain four spaces in a row, but in the rendered output, when not formatted as code (as in revision 1), the gap in the strings is clearly different. Indeed, when I paste the definitions of a and b from the source into a Python interpreter, they show up as being equal (a == b returns True), but when I paste the rendered output into Python, they are unequal (one has four spaces, the other just one). When the lines are indented, so they are rendered as code, they are rendered as equal.

After the first revision, the question was edited many times, including changes to the whitespace characters in the strings, triggering many "can not reproduce" comments, so please check revision one of the question.

Here's a screenshot of when editing revision one: 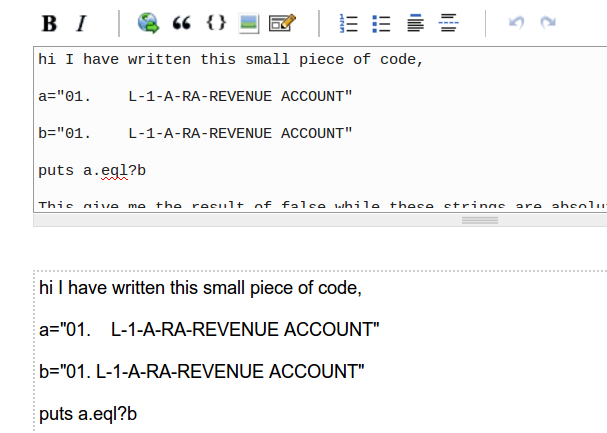 Could it be that those strings contain some strange whitespaces or control characters (backspace maybe?) and thus are not rendered properly?

The first code example uses no break spaces (&nbsp; == &#160;), the other uses normal spaces that do get collapsed.

35
Curbing excessive whitespace in front of code
143
Beware, all ye who `enter code here`
2
Why isn't this code being formatted properly?
7
Cannot post question; "improperly formatted code"
27
How do I edit a post to distinguish interspersed code and console output clearly?
298
Change the code block button from inserting indentation to triple-backticks
34
Why does the first line of a code block often get an extra level of indentation?