Can we please not use haskell questions for review audits, at least in the close and reopen vote queues?

The trouble brought by Haskell audits have caused some users to skip reviewing haskell questions in the queue altogether. If we prevent questions with the tag from being audits, some Haskell tagged questions may be closed when the Haskell community doesn't want them to be, but they can be easily reopened because few will be wrongly closed. Should having separate communities within SO that follow different rules even be allowed?

Can we please prevent questions with the Haskell tag from being audits?

people not familiar with the tag or related questions (the majority of reviewers) will likely fail audits related to Haskell.

The trouble brought by Haskell audits have caused some users to skip reviewing haskell questions in the queue altogether. 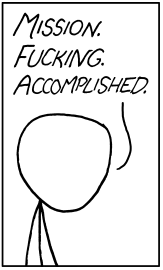 That's why there's a Skip button. So if you don't know what you're looking at, you can leave reviewing it to someone else. Doesn't mean you need to be an enthusiastic Haskell user to review these questions, but if you're not even willing to do a bit of research then... Well, there's plenty of other questions in need of your attention.

You know by now what my suggestion would be about how to deal with controversial audit cases. This is particularly applicable to close vote reviews, where there can be significant differences of opinion on what is and is not acceptable on the site.

That said, let me comment about the argument that the Haskell community isn't policing itself to the same standards as other tags. As someone who has been tinkering with Haskell lately, and thus reading a good number of Haskell questions, I don't see a quality or policing problem in that community at all.

Due to the nature of the language and the current community of practitioners, you will get questions that involve more theory than in others. Some people seem to be reading these questions as too broad or opinionated. However, the best [haskell] questions still tend to provide the code they've tried and a clear statement of what they want to do.

See the subject of this audit dispute, where I think people are sticking too close to the letter of the law rather than the spirit of it by reading "What's the "right" way to do this in the Haskell world?" as soliciting open-ended opinions. I don't think the Haskell community is failing to police themselves by leaving that open. On the contrary, I think the rest of the community may be getting too restrictive if a question like that is no longer allowed.

TL;DR, NO, don't remove Haskell questions from the queue. If you're not sure whether a Haskell question is a good one, skip it. Actually, if you're not sure if any question is a good one, skip it. If it's indeed a bad one, it will attract attention sooner or later again, but killing a potentially nice topic just because you thought it might be a bit opinionated is IMHO not acceptable.

My two cents as a quite recent haskell contributor.

There's one thing I want to get out of the way before saying anything else, and that's that I believe Haskell tag on SO is indeed quite different from tags for other, mainstream programming languages. There's a lot of possible explanations, but in short, because it's still a niche language, the posts of "I'd like to solve an (easy) problem with my code" appear in a much lesser proportion to more open posts about language and code design. My opinion is that we, as a community, are mostly learning haskell, learning how to approach problems with it, and there's little "rule-of-thumb" solutions to known problems.

Heck, I've asked a potentially problematic question not later than yesterday! I think it showcases the fact there's a lot of openness in the community about reasons and discussing the topics that (bear with me) whilst not perfectly practical in a given minute, can bring huge benefit to the community in terms of better explanation of why, not how things happen.

This can certainly be confusing for a reviewer, appearing as an endless, open-ended debate. In practice though, I haven't yet seen posts that would drift into oblivion of opinionated guessworking. If we were to kill any post that goes even slightly beyond "Specific programming problems", that could effectively mean that a lot of theoretical Haskell questions would have to be asked on ComputerScience.SE, but I hardly see them as belonging there. Let's keep SO a place where a creative process is still allowed to happen.

1
Why is this considered a good question?
537
There is no shame in using "Skip"
114
I do not understand why I failed this audit
16
Why was my clarification of the answerer's code rejected?
36
Can a question with an accepted answer be closed as unanswerable
19
Should I amend or add an answer?
14
Is the reopen audit 23084722 correct? There isn't even a question there
-8
Another (Bogus?) Audit
31
How to dispute a review audit
21
Is this a good reopen queue audit?
See more linked questions