Want to improve this question? Update the question so it focuses on one problem only by editing this post.

So what about idea of making it connected to some of existing social networks with more ease. I find these reasons for it...

Note: This response is to the request to encourage putting more content on social media via a prominent "share" button or any sort of automation. Obviously we already have the "Share" link on every post, and thats fine by me.

First off, SE/SO is not a social platform for programmers. Its a Q & A repository. The goals are very different.

I see this feature as driving a lot of unwanted traffic. To your points:

It will extend the reach to get it noticed by many others including some other fellow coders in ones friendlist.

Most experienced programmers know about Stack Overflow. This might reach some new people, but I don't see a lot of benefit here.

It will be helpful for initiatives like code.org, making public more curious about learning to code.

SO isn't here to teach people to code. I'm all for people learning, but we don't need more "Give me teh codez" or "How to learn X language" questions

It will, to a great extent, increase the traffic on StackOverflow, further increasing the revenue(if it's a subject of matter with an importance to a company, be it no-profit company)

Ok, this might happen. I don't think lack of traffic is really SO's problem though.

It will attract Coding Buds, i.e. Teenage and below Teenage folks(using fb for the sake of jus!) to see something of useful to see in their news feeds than some other crap things happenings all around(subjective clause).

See my point about us not being here to teach people to code. The effect could also work in reverse, if such people see truly good content, its likely to be so far over their heads that it could turn them off. At the very least, they are unlikely to understand it. 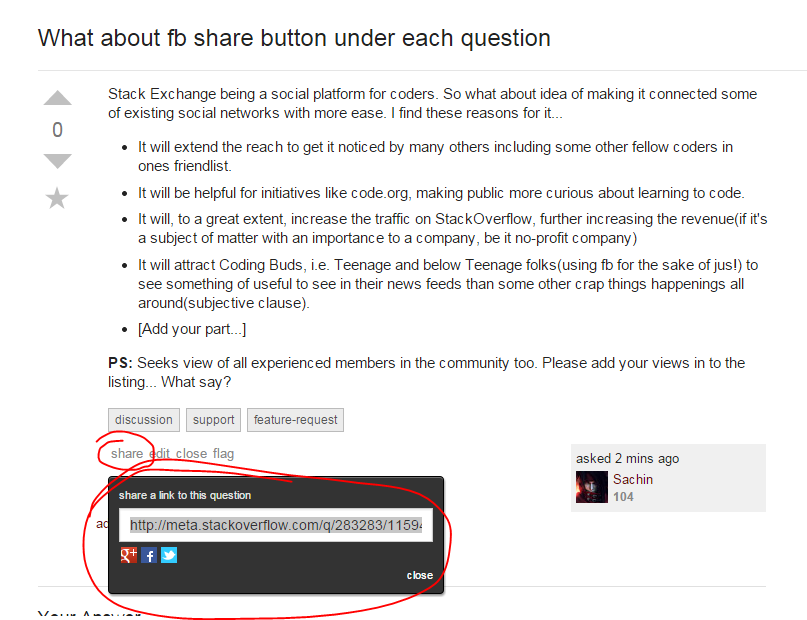 Not the answer you're looking for? Browse other questions tagged discussion support feature-request .

24
What action should be taken on an answer making opinionated statements about the subject of the question and linking to a blog for more?
31
What is the purpose of making trivial edits to closed questions?