On the 28th November I had a total of 32 upvotes and gave one downvote. This should mean that my reputation is capped at 200, however my profile lists this as 199:

My /reputation page correctly lists this as 200, however that doesn't appear to include the downvote at all: 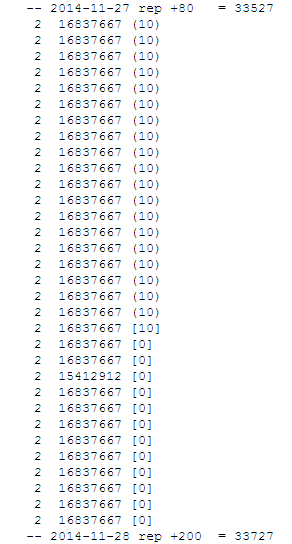 Your reputation log still reflects that you downvoted, but a later day will have a +1 post removed entry.

The entry is only there to mark when you voted and would have lost reputation; the actual vote is undone as the post is now deleted. As such it doesn't play in the cap for that day either, the vote did not need to be compensated for by an otherwise capped upvote.

Your reputation audit trail doesn't include deleted posts, so the -1 downvote isn't listed there.

Not the answer you're looking for? Browse other questions tagged bug status-bydesign reputation .

6
Does downvoting count against progress towards the "Earned at least 200 reputation" badges?
92
+100 trusted reputation on the site which reached the threshold
2
Does getting an unaccept change the "accept don't count towards the max" calculation?
34
Got a +1 notice when undownvoting post despite not having earned reputation
28
Why am I still a trusted user?