You currently have this close reason – emphasis mine:

Questions about general computing hardware and software are off-topic for Stack Overflow unless they directly involve tools used primarily for programming. You may be able to get help on Super User.

Now, the problem is, there's also a direct migration path to Super User. What purpose does this close reason serve, then?

Let's see what should really happen: 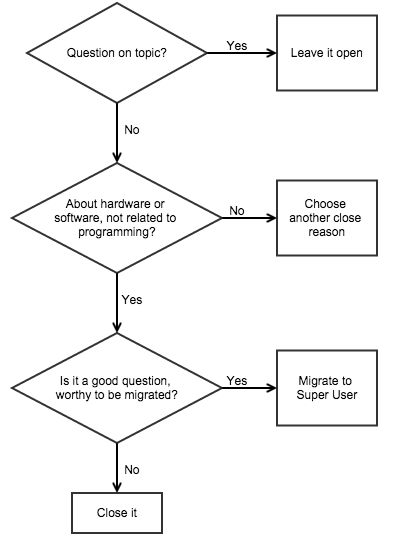 Why the current situation is bad:

It shouldn't say, "Yeah, well, you could ask on Super User", because what we see happening quite often is people asking off topic questions on Super User, assuming it would have been fine, because they were told so.

This leaves a bad user experience. First you're told to go somewhere else, and then people on the target site have to fix it and tell unexperienced users that they've been getting the wrong advice through an official message, signed by people who should've known better.

And I dare say the first close reason is also often chosen for questions about phones and electronic devices, which are off topic for Super User – but many close voters on Stack Overflow may not know that.

A few other issues: Those posts are usually just copy-pasted, and users on Stack Overflow might also be wondering why their question wasn't migrated directly. It encourages cross-posting ("hey, look over there!") rather than showing people that a question can be moved, or not telling folks about a site that will not help them anyway.

So please, remove the mention of Super User from the close reason, and let it simply say:

Questions about general computing hardware and software are off-topic for Stack Overflow unless they directly involve tools used primarily for programming.

Vote to migrate all questions that are good enough for Super User and on topic there.

Back then, there is only 1 site to ask questions about general computing hardware and software, the Super User. Thus, the closure message seems to be appropriate at that time.

Now, the closure message seems suggesting to always ask those on Super User, disregarding other more appropriate sites. Every time I flag android-usage questions with this, a part of my soul gets torn, since I also have to let user knows the existence of Android.SE. Meanwhile, look at how often Android questions on Super User got closed.

I was starting to be active on Android.SE, and not so often finding a question related to developing an Android app. Of course, the first thing that pop-ups in my mind is to flag it. Now, this is one of the off-topic reasons:

Questions about writing and publishing Android apps, writing custom ROMs, and other topics that are primarily of concern to developers are off-topic. Consider taking advantage of other resources that may be appropriate for your question.

Instead of pointing it directly to Stack Overflow, it provides a link. Clicking the link goes to a post on its meta, which seems to be inspired by its MSO counterpart. But here's a difference: Meta Android.SE lists so many alternatives, which I really appreciate it.

Also, Shog mentions something similar to this in the comment

We could consider a "where to ask hardware/software questions that aren't programming questions" topic though.

which I and the OP agreed to

I'd like that part where you link to a FAQ-style page instead of one site. Then you could redirect all things Android, iOS, etc. as well.

So, my proposal is either:

67
Retiring Our Community-Specific Closure Reasons for Server Fault and Super User
75
Overhauling our community's closure reasons and guidance
315
Where can I ask questions that don't fit or are off-topic for Stack Overflow?
147
Where can I ask about "finding a tool, library, or favorite off-site resource?"
43
Considering changing the migration process
38
The asker is directed to another Stack Exchange site, even though it would be off topic there
35
Closed question post-notice fails to display closer's choice that another Stack Exchange site is appropriate
26
Off-topic option: include Unix and Apple sister sites on off-topic notification
29
Avoiding overly specific site referrals for general computing and sysadmin questions
-4
How can we streamline the close flagging and voting dialogues?
See more linked questions

34
Are programming-related web apps off-topic on Stack Overflow?
11
How to respond to "My compiler failed to install (or update)"
38
The asker is directed to another Stack Exchange site, even though it would be off topic there
26
Off-topic option: include Unix and Apple sister sites on off-topic notification