Non-answer has been edited and the edit accepted... Twice. What's going on here?

So I came across this answer(now deleted) while searching for a solution to my own problem (actually the subject of the question this was 'answering') and I'm honestly just shocked that not only has this very late and blatant non-answer survived for nearly two weeks, but that it has been edited as if it was a question twice (both edit summaries even use the phrase "the question"), both times by users with 1K+ rep and both times the edit has been accepted.

Now I'm aware that Hanlon's Razor could probably apply here, but if I'm right in my knowledge of how SO's edits work that means that 4 separate people have missed that fact that this is an answer, not a question. Does SO have any systems in place to prevent this sort of thing from happening and if not, should it?

As already explained in @cVpIZ's answer, the second edit was done by a reviewer in the edit review queue. They most likely did not realize that they were editing an answer. 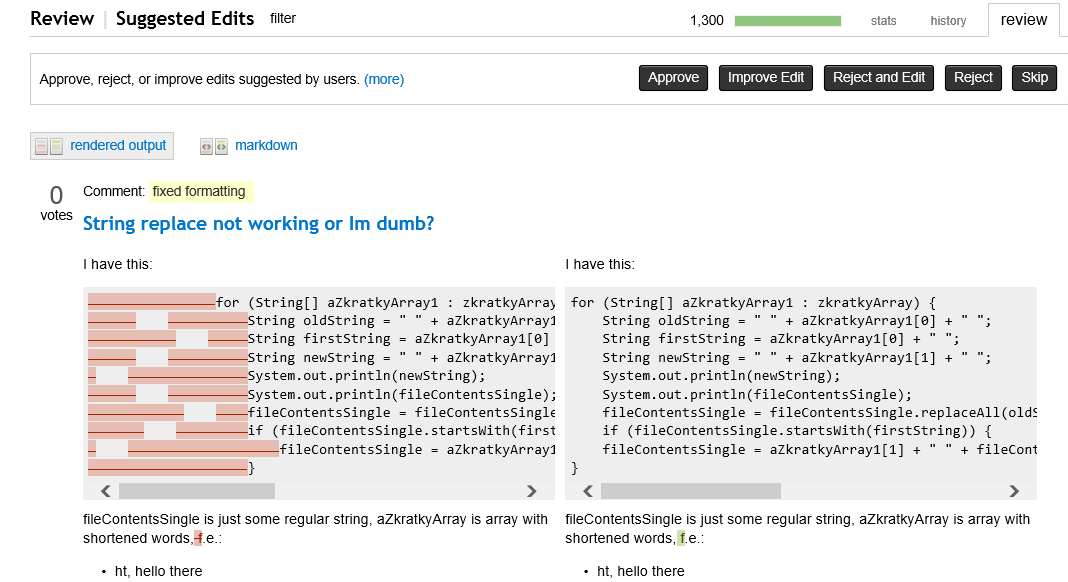 None of this shows whether you're looking at a question or an answer. You have to scroll all the way to the bottom to see it indicated in very small text:

There have been requests to fix this, but unfortunately it has not been addressed so far: Can the type of post being reviewed be displayed more prominently?

Does SO have any systems in place to prevent this sort of thing from happening and if not, should it?

Yes. Users need 2k before they can make edits without them needing to be reviewed by others. Users with at least 2k who review suggested edits can be review banned for approving bad edits either automatically by failing review audits, or manually by a moderator. Also, the post owner always receives a notification if there post has been edited. So they can either roll it back or leave it be. And on top of all that, there is tens of thousands of active users in which one of them, will usually notice it sooner than later and get it fixed.

26
Can the type of post being reviewed be displayed more prominently?

5
How to handle an answer that should have been an edit to a previously posted answer?
51
The nuclear option: massively editing the accepted answer
32
Should accepted answers on old questions be edited to reflect the "best answer"?
22
Is it ok to edit and add an author's own content to their post, eg. from a comment or from the post to the title?
20
Same answer on the same question twice
16
Is it acceptable that a user deletes his approved answer after I changed the accepted answer?
71
What's the etiquette on updating an accepted answer?