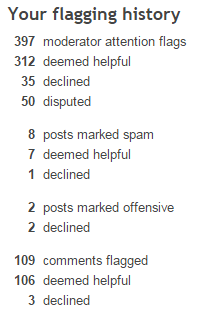 8
When can you flag again after recent flags have been declined?
26
Flag banned after getting a helpful flag

25
Too many declined flags to flag post
6
Should code screenshots and unformatted posts be flagged Very Low Quality?