Effectively dealing with people who are immune to criticism

While browsing the site today I came across this answer. Since the php and javascript tags are such a jungle, a lot of questioners need more guidance than simply "use this code instead, it will do what you want". So I made a comment about code only answers being not very good (because I thought in this case specifically it warranted more explanation). The comment thread quickly escalated: 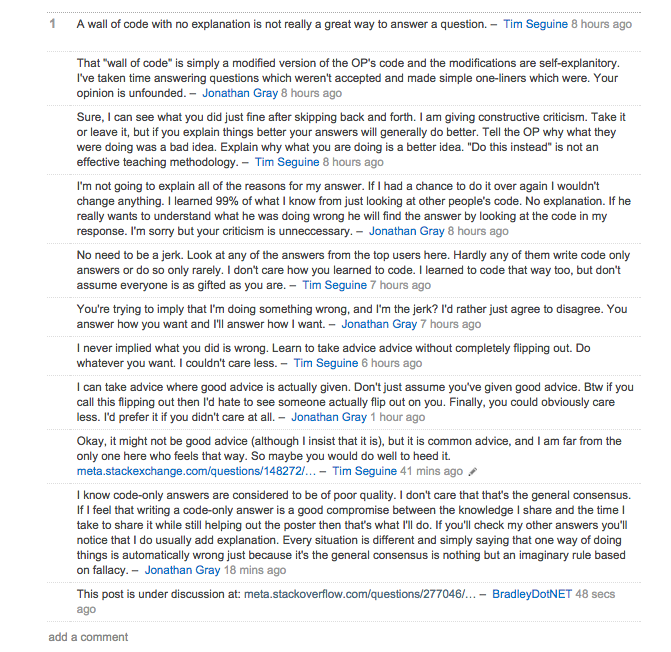 I am still a little dumbstruck, and I am wondering how I (specifically in this case) could have handled the exchange better. Should I just walk away or what? Downvote and forget? I am having trouble deciding when was the point I should have just stopped responding. Was I too aggressive? I feel like I don't often get overly negative responses to my comments, so I am honestly confused.

As far as what you said, the statement No need to be a jerk. seems mildly inappropriate in context. Him saying that he doesn't feel that your criticism is valid is not him being a jerk. He actually responded rather constructively to that unconstructive statement (and continued to stay rather constructive for the rest of the comment thread).

All in all I see a few comments/portions of comments getting a bit noisy, but they do seem to be staying constructive.

Since he clearly has no interest in discussing this with you I'd say you're largely wasting your time by commenting past the second or third comment, but it's your time to waste if you want to waste it.

Once a user has responded to your comment (especially on the internet), it's rare that you'll change their mind.

In this case, a competing answer that does fully explain the code would be a better choice. It'd serve the purpose you want to serve (educate the OP) and it would allow other users to see what a good answer looks like. Be the change you wish to see, and all that.

As always, if there are comment flags that devolve into being not-constructive, it's probably best to flag the whole thread and move on. A moderator will see it and intervene if necessary.

Not the answer you're looking for? Browse other questions tagged discussion etiquette .

14
Feedback on clarifying edit rejected for defacement or deviation from original intent
114
Dealing with contributing but abusive users
62
Should I have handled this situation better?
32
Answering a question after it has been flagged as a potential duplicate. Bad form?
7
How could I handle rude and offensive comments kindly?
56
How to deal with users who are being abusive on valid criticism?