Poor conduct of high reputation user and abuses that follow

Please see the following question, which I feel was moderated only because I called out the user "creack" for his initial response and comments (which he or someone has deleted): Do I want a container handling multiple requests?

Rather than instantly flagging the question and leaving it, he flagged and answered, including a quip at the start of his initial response (which I edited, while preserving potentially useful content). The quip in his responses included a remark about my skills and a very dismissive instruction to "go see the documentation", without so much as a link to a relevant section.

(Later, my question was marked as "off-topic", which is obviously in error as my question is about specific technologies as indicated in the tags.)

Obviously lots falls between the cracks in a system like SO and a majority of the time serves the general good quite nicely. But I think this is a circumstance where an expert mis-stepped and was unwilling to admit that he was too harsh. Instead, my question has been buried out of spite to hide the fact that his initial response was extremely rude and unhelpful.

I'm hoping to see this question restored at least so that others might be able to answer it, or such that I can come back and answer it myself once I've completed my research.

I do not think it's fair that just because he was unable to understand my question, that I should be unable to ask it.

For the record, this was the entire sequence of comments on the answer (don't ask me about the formatting): 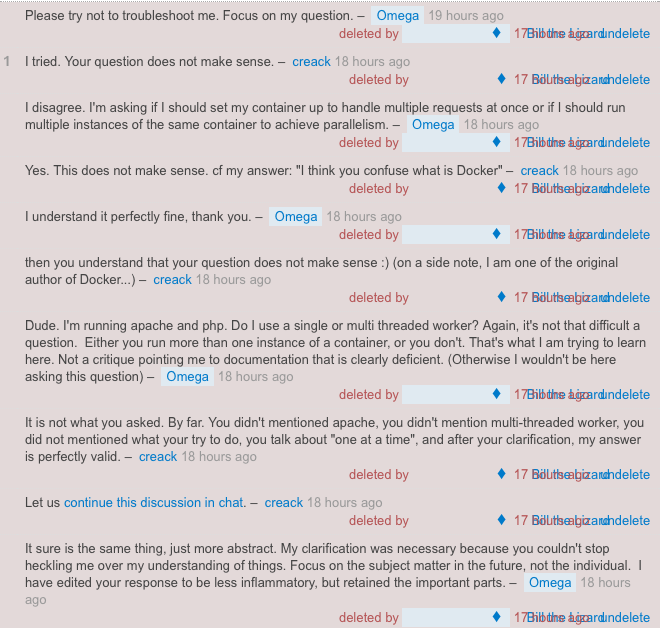 and your (now deleted) comment on the question read as follows:

This "on hold" status is very contrived and obviously motivated by creack's realization that he handled his response very poorly. I'm disappointed to see SO become political like this. As it pertains to "programming tools", I am talking specifically about docker. A tool used over the course of developing a project.

I think you're reading a little more into this than was present. I don't see creack personally attacking you, and they weren't the only one to vote to close that question. I don't think they were targeting you because of a personal interaction.

In any case, I didn't agree with the close reason, so I reopened the question.

Not the answer you're looking for? Browse other questions tagged support moderation review-abuse .

6
When flagging a question, does it matter which flag I use?
25
Why was this custom flag declined?
26
Failed and banned for user who answered the question correctly?
56
Is this plagiarism?
31
What exactly is "artificial inflation of reputation", and where is the line?
66
What percent of Meta feature requests are read or seriously considered?