When is it OK to ask shell scripting questions on SO?

Stack Overflow has a [bash] tag that people use and seem to like. But... don't most of those questions belong on unix.stackexchange.com? Like this question which is clearly about the linux command line and common utilities? Sometimes I see questions get moved, like this one that I answered, which ended up on.... SuperUser? Is it ever OK to ask questions that are purely about *nix command line on SO? When should they be moved, and where to?

Edit: What about this one? Move multiple files with unique name to new folder and append to file name

I believe I'm in the minority when it comes to this subject, but I'll add it as an answer and let the voters decide.

I think shell questions should be off topic on StackOverflow unless your question is specifically about scripting the shell.

Some people seem to have a problem with this distinction. They seem to think that help with a shell command is "scripting". I would argue that it is not. Let me try to illustrate the distinction with an example from your first linked question. The OP states:

I'm new to bash (started with DOS circa.1983), so need some help with crafting a script that will list folders & files in the backup folder not found anywhere in the source folder, OR files that are physically identical but in different folders.

Although a crap question (code my bash script for me), the task that the OP is trying to achieve appears to be complex enough as to require the creation of a script to accomplish. It seems like it would require listing directories, piping the result to some kind of parser, piping that result to something that would find the differences, and finally to something that would resolve those differences by copying files. Of course, I'm not a bash script writer, so I am completely wrong. From your answer:

is all that is needed to accomplish the OP's goal. This is not a script. It's a command. rsync is a file transfer program found on unix boxes. StackOverflow is not the place to ask about what command line arguments to pass to rsync in order to back up a directory onto archive media. That has about as much to do with programming as asking how to start Steam up in full-screen mode.

There is some overlap between Stack Overflow (about programming) and sites about computer usage (Super User, Unix & Linux, Ask Ubuntu, Ask Different, …).

In a nutshell we have: 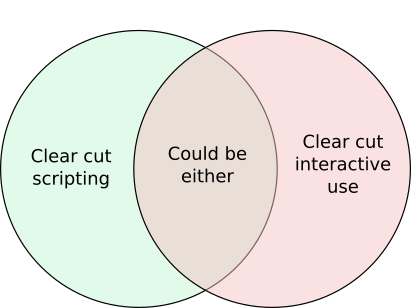 These questions are on topic by all criteria listed on the What topics can I ask about here? help page.

These questions are off topic since they are not about programming per see.

These could be questions about usage of command line tools often used to automate tasks, how to tweak the output in the shell, etc.

These questions are "unique to software development" the same way as "How to resolve merge conflicts in Git" or "How do I show whitespace characters in sublime?", and they are all on topic for Stack Overflow. (Personally I'd actually argue that those two last examples are more off topic than general shell questions, yet they are very well received by the community.)

Command line tools such as find, awk and xargs can be used used by an interactive shell user, and git and sublime can be used for collaborating on and editing a paper. Doesn't matter much.

The fact that general shell questions are on topic also for UNIX.SE (see their What topics can I ask about here? page) is basically irrelevant. Even if it's "more on topic" on another site, it's still up to OP to decide which site to post on. As long as it is on topic for SO, it's fine to post it on SO.

Based on comments from more experienced users, it looks like the answer relates to how the person is using the shell. "What argument can I pass to cd that will cause it to birth kittens?" is not on topic for SO, i.e. questions about a single command and it's uses or arguments that don't otherwise relate to programming.

However, questions relating to scripting are on topic for SO. A shell script is a program and thus... totally alright for SO.

Stack Overflow is a question and answer site for professional and enthusiast programmers.

Super User is a question and answer site for computer enthusiasts and power users.

43
Let [shellscript] burn in [shell]
21
Are computer-forensic questions off-topic?
18
Is [xcopy] an appropriate subject for Stack Overflow?
13
Questions on Visual Studio Code
8
Is it on-topic to ask a question about command line toolkit used in development?
31
When is a question about a Unix command complicated enough to be a programming question?
10
Re-tagging questions related to Unix/Linux text processing out of shell specific tags