How do I know if I am a victim of serial downvoting?

Today I have lost 192 reputation.

Mostly due to a question being removed, in which my answer had received 18 upvotes, so all 180 points were removed.

Am I justified in thinking this is a really rash decrease in reputation? It seems to me like an awfully odd coincidence that my question receives no votes for 8 days, only to have two downvotes one minute apart.

Thank you guys for the discussion. See the comments to the answer for more information on serial downvoting, because I did ask that even though I'm not a victim here, how would someone know if they had been a victim of it? I think that's an important fact everyone should be aware of.

You are not the victim of a serial vote, no.

The post deletion does not play in the serial voting script; it is not a up- or down-vote given to you by another user.

That leaves the 4 downvotes you received. Because those 4 downvotes were against only 2 different posts, it took (at least) two different people, and 2 votes against you from one person generally is not seen as a serial vote by the system.

Note that you have a bounty on the question; you are attracting attention to the post. That attention can go both ways!

The two downvotes on your answer occurred shortly after you posted it. It could be that the people that downvoted your bountied question found it because they looked at your profile and saw that you had a bounty open.

If you had been a victim of serial voting, you'd have seen:

Short answer, no, as Martijn said.

Serial downvoting would be if you looked at your answers/questions list and saw that a large number of them had all been downvoted once. That would indicate a single person going through post by post and downvoting everything you have done. Example: 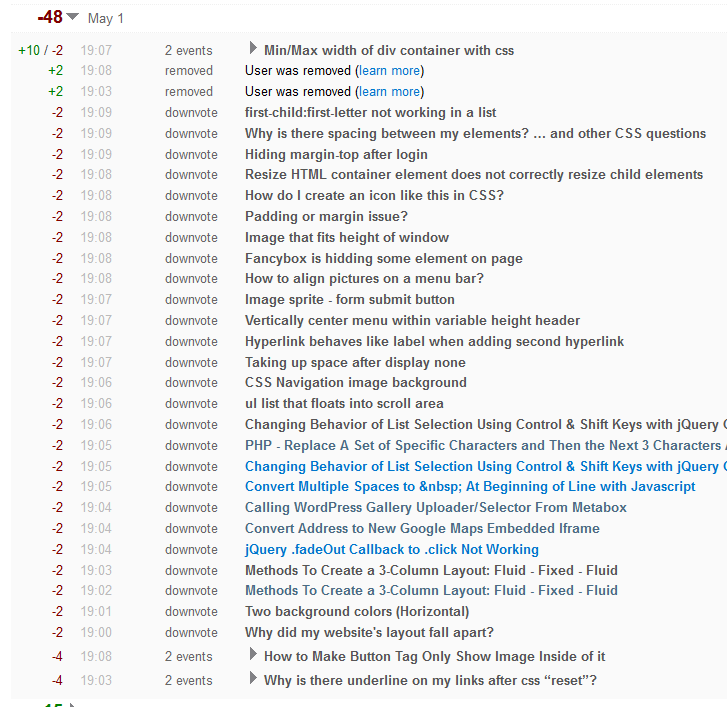 In cases like the above, when it's blatant, the system picks it up and will reverse quickly. The only scary thought is someone who starts going at it over a several week period. A downvote here, one there, maybe an upvote thrown in to confuse the system.

Given that you had 2 people downvoting, and had only two posts affected, you aren't currently being attacked.

-55
Downvoted after voting to close a question
10
When does downvoting get "serial" enough to be worth reporting?

46
Serial downvote reversal bot possibly missed some downvotes
107
"voting corrected" does not reverse site association bonus: it's not OK
2
Victim of serial up voting
2
How to know if question has serial voting?