Here's a bug I found where the hot meta posts vote counter for a question doesn't match the vote count. I don't think it's server lag because I don't think a question can receive 20 votes within a few minutes (although I don't quite know when the page is refreshed). Here's screenshots for proof: 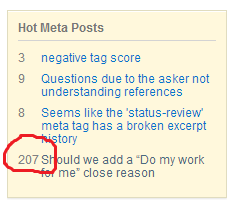 That little sidebar is shown almost everywhere on Stack Overflow and Meta Stack Overflow. As such it is way too expensive to get the latest and greatest vote totals for the posts that are included. That would require several database queries for the tens of thousands of times that little box is rendered.

So, instead, the numbers are cached. Once every so often (every 20 minutes to be precise) the box is re-built and the then-current post score is included.

In other words, this is not a bug, but status-bydesign.

The votes counter on Hot Meta Posts is correct when the post first appeared on the feature. I don't know exactly how often it changes, but anecdotally it looks to be around every half hour. It has been confirmed that it updates every 20 minutes.

So, if the post appeared on Hot Meta Posts 15 minutes ago, it's not unlikely that a few upvotes have occurred in that time; hence the discrepancy.

Not the answer you're looking for? Browse other questions tagged bug status-bydesign community-bulletin .

-5
When does the Hot Meta Post Block get updated?
2
Why does Hot Meta Post show different upvote number than the actual question?
14
Can the threshold for what makes it into the Community Bulletin be raised?

1
Up voting show an error when revote an unrefresh page
14
LQ Posts Review - Error while trying to delete vote after daily vote limit expiry
70
Vote count and badge scores not updating
21
Minimum number of hot meta posts not shown
52
Why is an important Meta post tagged [featured] not showing in "Featured on Meta"?
24
The total review counter does not increase after a review action is taken unless the page is manually refreshed