A few days ago, I got a notification in my Achievements dropdown that says "You've earned the "talk in chat" privilege! Learn more about it in the help center." 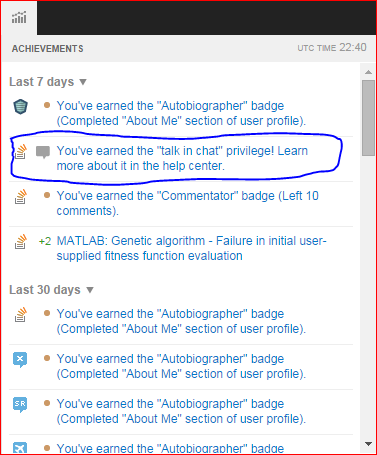 I immediately went over to participate in this chatroom, but found that I wasn't allowed to do so yet.

The help center shows that this privilege is still 3 reputation away.

Why have I been notified prematurely?

You get a notification as soon as you hit the reputation requirement. If you subsequently lose a few points and drop below the requirement the notification isn't removed as it's highly likely that you'll regain those points very soon. Unfortunately if you view the site during that window it looks like you've been awarded the privilege early.

If you got it every time you reached the rep requirement you could end up getting it three or four times as your rep bounced around the score.

This would be more annoying than temporarily finding that the you didn't have the privilege.

The only other solution would be to delay the notification until you were well over the score or had been over the score for a significant time, but that would lead to people complaining that the notification hadn't arrived or had arrived late. It also wouldn't solve the case of when you drop below a privilege level as a result of issuing a bounty.

Look on it as an incentive to provide more good content.

6
SO says I can set bounties, even though I do not have enough reputation
3
I got access to the 'trusted user' tools privilege before attaining 20000 reputation
1
Achievements dialog reports incorrect data
0
I still have a 3K privilege notification in my Achievements list after dropping below 3K
1
Got a notification that a privilege has been earned even though my reputation is less than the reputation required to earn the privilege
1
Does StackOverflow use only upvoted reputation for assigning privileges?
14
Achievement notification says I've earned the downvote privilege, but rep is only 121 and I still cannot downvote