Do we really need to keep closed typo questions with accepted/upvoted answers?

I've read the rules for the 9 day automatic deletion script:

So what about questions caused by typographical errors? to be more specific, the ones closed citing the following close reason:

These questions might have accepted as well as upvoted answers which simply points out the typo, hence will not be deleted according to rule 5 and 6, by the current script.

Once these questions are closed as typo, has accepted or upvoted answers and there are no edits for the last 9 days Rule 8, it probably means that the issue was indeed a typo.

I do not think such questions or answers will be useful for any future readers. The close reason itself says:

Do we really need to keep them...? If not, can we modify the script to delete the typo questions, if there are no significant edits made after closure?

The criteria for deletion of such questions I'm suggesting as of now is:

But it is open for discussion...

P.S.: I don't want this discussion ending up removing the close reason itself, or rewording it. No cheap fixes, please!

For those worried about letting the roomba loose on abandoned (No edits or re-open votes for n number of days) questions closed as not useful for future readers by the community, Let me address few of the concerns raised here:

I managed to get my typo-fix-answer accepted within single day after posting this. As of now, the only close vote is mine.

I say it is not going to be useful for anybody else. No matter whether you downvote or close the question (or answer) - according to current system it will never get deleted.

Okay, So why delete it?

If you look at it, The title reads

The only ones likely to visit the question is probably having trouble with their dropdown. (Oh, I forgot those fighting our ~10k close vote queue,

We'll only cause frustration to 99.9% of those trying to fix their dropdown by keeping such a question with a typo solution.

Think about how many of these are out there, not even closed...

I hope we all can agree that there is no point in keeping such typos. I say we unleash roomba upon them.

So the next concern is:

this close reason is often misused to close syntax-related issues and not true typos.

There are two points here - Syntax errors and Misuse of close reason.

Assume there is a method called print() in a programming language X that prints a string which is passed to it.

What we can do?

Close them all as duplicate of a canonical question!

Ohkey.What should be a good canonical question that will help such users?

What's the point? the answer is always print(msg).

What is the issue..? lack of minimal knowledge, research effort, enthusiasm, etc. which we should not be encouraging as a community for professional and enthusiastic programmers.

A canonical question, something along:

A: You can print a message using the print() method like print("hi").

Ohkay, now we have a canonical question.

But there is still an issue here - Unlike other scenarios, when will this ever end? This will never stop as long as new people learns language X.

Is there any point in keep on closing thousands of such questions as duplicates, duplicate of duplicates, and their duplicate manually forever, and keeping them?

NO - My humble opinion.

Besides, What we're effectively doing by keeping all possible question as duplicate for each scenario where the answer is a simple one liner is - choosing the Option 1 above.

We should help the user by answering it or direct the user to our canonical question where he can find the answer.

And then, burn the question, since it is not useful for future readers.

Okay, I see still some are worried about few exceptional syntax errors that happens too often, in that case please read on to the next section:

There is one thing I'd like to remind you at this point (One of the best, and strongest feature of StackOverflow, IMHO): 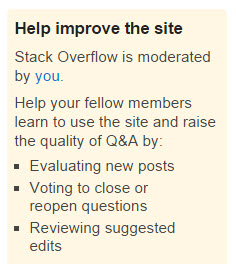 Let us consider our print() method in language X.

I do not know language X - So I'm not even going to see it.

Now a 3k+ user who votes to close citing it is not going to be useful for future readers are probably the ones which are familiar with the language X, as well as StackOverflow. who loves being part of this community, and wish to keep it clean.

Rest of the 3k+ users who visits such a closed question and doesn't think it is worth re-opening for the next n number of days are also the type of users mentioned above.

According to our proposal, a question becomes eligible for deletion when 5 such 3k+ users indicated that the question is not useful for future readers, and the rest silently agreed with it by not voting to re-open it, along with the original poster who abandoned it by not even trying to improve it. All I have to say is

If you don't trust the community. then that means there is something wrong with the system. Maybe it's time to discuss why we no longer trust our community..?

Not satisfied..? Ohkay, what if, in case, somehow a good question gets closed..?

Now what if, anybody who thinks the question had some amount of value finds it after deletion?

Now let me repeat -The anybody I was talking about is part of the community.

It seems there are concerns regarding the criteria.

We should not bother about the upvotes on typo-answers.

If you had looked at my original example (Now deleted, 10k+), even the upvoted answerer voted to close the question. (I do this as well, answering such questions will indicate that it is solved and might save somebody else's time which they can spent answering other useful questions)

Okay, this one is thought.

If you look at the history of question - Initially this criteria was not striked out.

So I'm weighing close votes from 3k+ users familiar with the topic over anonymous upvotes on question, as of now...

If the post is truly never going to help anyone, then deleting may help clean up the site regardless of answers.

My issue is letting the roomba loose on on these questions assumes the close reason is correct. I think this close reason is often misused to close syntax-related issues and not true typos. Your original example would appear to be more of a syntax error than a typo although that is tough to say for certain based on the OP's limited feedback. While making syntax questions searchable is difficult, it stands to reason they may have some value for learners of a language, so just deleting them without human intervention would be a mistake.

To make my concerns more clear, the suggestion here is talking about eliminated the 3 most common control for protecting a question from automatic deletion. Automatic anything needs to be almost foolproof as once it is gone, there is virtually no chance of it coming back.

There is too much to worry about to fix wrongly closed questions. In fact, we have encouraged users not to worry about questions closed for the wrong reason because there are other things to worry about, so any argument that if it is ok to delete wasn't acted on before deletion after only 9 days is bullcrap.

I support this, except that I think the score <= 0 requirement should be kept.

If it has a positive score, obviously someone found it to be a good or useful question, and so others might as well. Remember, the close-voters are only human, and might think it is useless when in fact it can help future readers.

I think the basic problem with doing this is simple: an automated delete system has no way of determining the value of the answer. That's part of the reason questions with upvoted answers won't get deleted. Obviously, someone thought it was valuable enough to upvote it. Terrible questions sometimes spawn truly great answers, and the site shouldn't be automatically deleting them just because the question was closed as a typo.

That line of reasoning compeltely ignores the issue of what to do with the reputation the answerer earned, which is another discussion in its own right.

The question I would pose to proponents is, "What harm are these questions doing?" The site should generally leave things alone unless they actually do some kind of harm, and whenever possible, that harm should be addressed without deleting content.

If the answer and question really provide no value and are doing some kind of harm, this should require manual clean up, with an actual person making a call about whether the answer is valuable.

In other words, I'm reversing your question. Do we really need to delete them?

118
What should the system be deleting automatically that it already isn't?
61
Why is deleting own posts consuming delete votes..?
37
Voting stats for "desperate accept" answers
17
Unsure how to handle typo question with vague title
-5
Why was this question shot down..?
6
Please allow us to self-delete questions for a short time even if an upvoted answer exists
4
Should we handle flags more carefully..?
12
Stack Snippets asking whether to abandon changes or not, when there are none