Getting failed for review audits when they are blatantly wrong

This is now the second time this has happened to me, where I'm "failed" on an audit which I believe is wrong. I get the distinct impression that these audit questions are automated which is a completely naive approach.

At best it can be argued it's not as verbose an answer as one might like but I certainly did not see reason to flag it for deletion.

The last one I was failed on was even worse because it says click here to see the audit you failed, and the answer is missing completely (presumably deleted). It was for a message which, based on the comment below, was mistakenly marked (and accepted) as spam, then the audit then assumed that if I did not give a 'spam' answer as well that I was wrong and needed to sit in the corner for a while.

Assuming this really is an automated process, can we:

and just in case others (likely) don't see what I see for that URL: 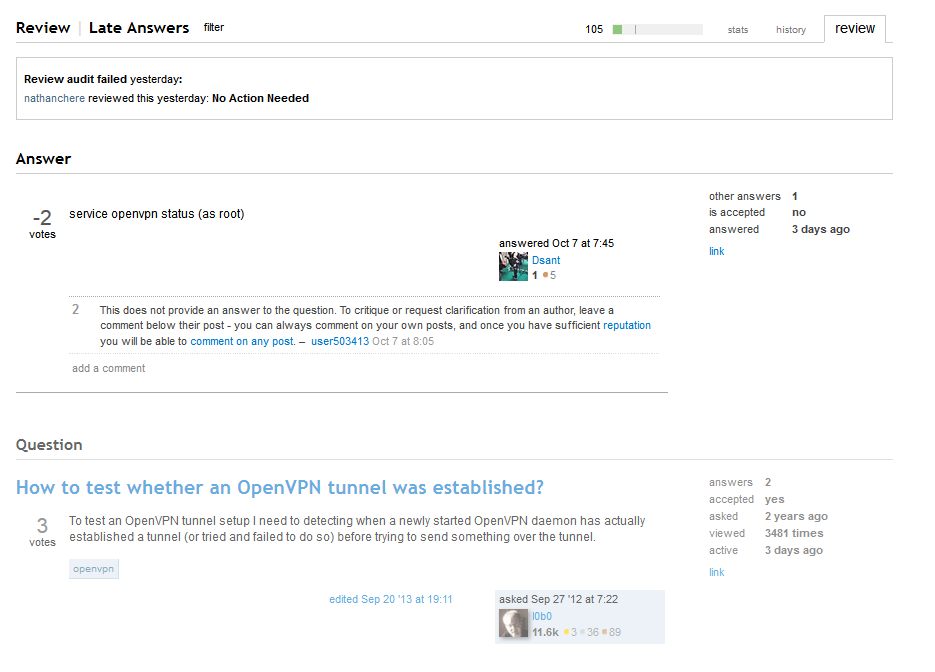 I agree that this appears to be a legitimate attempt at an answer and doesn't need to flagged or deleted by the community. That said, flagging and deletion are not the be-all and end-all of reviewing. It only takes seven characters to make this answer a complete sentence with proper formatting:

It's still not a great answer, but that's an improvement by any reasonable metric. It takes minimal effort, it requires no domain knowledge, and you have full edit privileges so you don't need to worry that you're taking up other reviewers' time to polish what could be a technically wrong answer. The guidance here is explicit:

Answers in the Late Answers review queue are also First Posts or very nearly so, since they are posted by new users, so apply all the steps for reviewing First Posts here.

Don't focus on the actual answer itself. Focus on the formatting and the etiquette of the author.

I'm not accusing you of being a bad reviewer or saying I would necessarily expect any good reviewer to pass this audit.1 That said, let's have some perspective here: You chose not to improve an answer that had plenty of room for improvement. The consequences you suffered were:

What you did wasn't terrible, but it also wasn't the best option available. You're under no obligation to edit but if you notice an opportunity to edit and don't feel like taking it, you should pass the responsibility to another reviewer by choosing Skip. You could have left a helpful comment for the author about formatting and complete sentences.2 You could have downvoted it based purely on the way it was presented. Instead you acted to dequeue the post while sending a signal that you didn't see any way to improve it.3

In response, you were given a nudge that prompted you to critically evaluate your process, which is what I meant by my comment that this audit worked as intended. A little introspection goes a long way, and even if it hasn't convinced you that you did anything wrong, at least it'll keep you on your toes and help you to pass future audits.

1 I'm not even 100% sure that editing this answer would have passed the audit, though this recent thread says it would. The audit system is far from perfect as evidenced by all the quirky behavior that comes up on meta.

2 You might still fail the audit, but at least then you'd have the comfort of being cited by staff as an example of someone who had been wrongly botslapped.

3 You could argue that "needed" is semantically ambiguous. Still, the FAQ is not ambiguous when it says, "Most posts can be improved. Use the Edit option, and edit thoroughly."

The reason for this is that we need a lot of audits; manual selection of audits simply doesn't scale to the size of Stack Overflow.

Also, you can raise the issue on Meta as you have done; note that the tag wiki excerpt for disputed-review-audits explicitly mentions that it is to be used for discussing issues with specific audits.

On meta.stackexchange.com, there is a feature request to bring a human factor into the audit system, which seems to address your concerns.

Not the answer you're looking for? Browse other questions tagged discussion review review-audits disputed-review-audits .