Today I was presented following First post for review:

This posts ask about .NET stack trace offsets, an issue that has come up many times before... for instance here. That seems to be literally the same question.

So I did was what I thought would be obvious... I flagged it "Duplicate" and lo and behold, I was presented with a review audit fail: 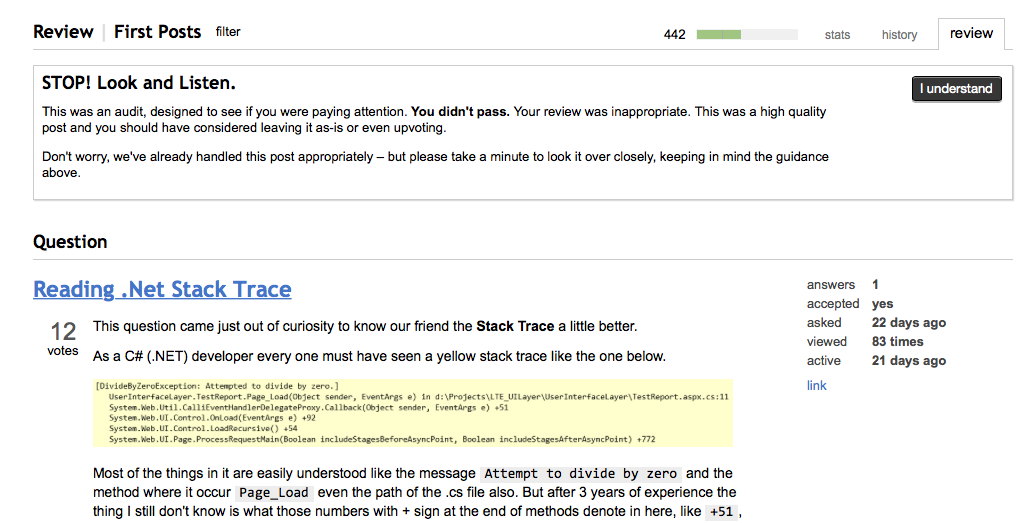 Probably, this post here is also a duplicate as the review auditing system seems far from perfect but still, this seems really extreme, or am I missing something?

You are encountering a common problem with the audits. The audits are selected algorithmically rather than manually, and as far as I can tell, a large number of upvotes can cause a question to be selected as a "known good" question for audits. As suggested in the comments, using the link to view the original question can usually give these away so you can pass the audit. In this case, I think the action you took was perfectly fair so you have to just accept the failed audit and move on. It happens to everyone that does reviews. If you really feel the need to dispute this, I believe you can contact a moderator and they can prevent the post from becoming an audit for someone else, but I don't know if they can remove the failure from your history.

As a side note, some comments have suggested that the ability to view the original question and tell that it's an audit defeats the purpose of audits, but I disagree. The audits are in place to keep people from mindlessly clicking through the audits, so if someone takes the time to view the original question and base their decision on that, I think that's okay. Searching for "Review Audits" on MSO will show you a LOT of discussion about this and various proposals for how to make the audit system a little more fair.

In response to your questions at the end of your post: No, a lot of upvotes does not necessarily mean the question is good or not a duplicate. It's an unfortunate downside to the audit system that I agree needs improvement, but it's not a terrible system either. If you pass most of the audits most of the time, you won't be banned, and there's no hit on your rep either, which I think is a good thing.

I think you took the correct action, and the occasional failure of an audit is fairly common among reviewers. As long as it's rare, you shouldn't see any adverse effects so you can just forget about it and move on.

Not the answer you're looking for? Browse other questions tagged bug flags duplicate-questions review-audits disputed-review-audits .

38
Review audit failed: "mark as duplicate" is inappropriate, even though it *is* a verbatim duplicate question
9
Smarter Review Audits
6
Stop look and listen when flagging exact duplicate answer