I was setting up a new QNAP NAS today, and imagine my surprise when I saw the Stack Overflow logo in the firmware: 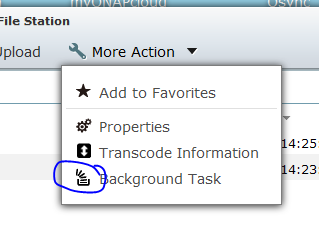 I realise that it's mirrored and monochrome, but that's still gotta be a no-no, right?

2019 Update: This is definitely the Stack Overflow logo, not something that just looks similar. When Stack revised the logo to change the number of the bars, the qnap implementation of our logo changed too: 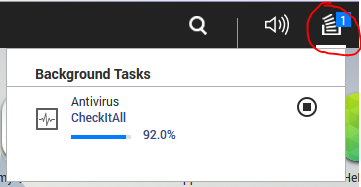 These icons all appear to be from the world's largest icon pack for Windows 8.

At the very least they are very generic although interestingly the particular icon in question is labelled "Stackoverflow" and is part of the "Social Networks" category of icons (the cog icon appears to be different, but they obviously use a little creative licence if they have the vectors).

IMPORTANT: I can't state 100% that these icons are the ones in the picture. They could have been made by the company if they have a talented graphics designer, and they could have come from one of multitude of iconset sites out there (increasingly developing for Windows 8 metro style).

If we assume they are from Icons8...

There does not appear to be any restrictions in using / manipulating these icons especially if they have been paid for.

From the Paid License Section (On the Icons8 Website)

Paid license includes unlimited use of the icons within a company without providing credit, and the vector source files

In this instance the company has taken the decision to manipulate the vector by mirroring the icon before using it in their software, which for a paid licence is perfectly acceptable (as far as Icons8 licencing is concerned).

I'm not saying this is right, I'm just giving context for where the icons may have come from.
As @ChrisF♦ points out;

which I completely agree with. It will be up to Stack Overflow to decide whether they want to pursue the matter further, I imagine though that this is common practice especially in icon set creation circles.

In either case, I wouldn't be too hard on QNAP.

but that's still gotta be a no-no, right?

If Stack Exchange has trademark rights over the Stack Overflow icon, they would have grounds for requiring that the icon be removed from that firmware. Note here that QNAP has a US presence and SE is US-based, so my response here is based on US law.

The fact that QNAP has paid for the icon set and has a license from Icons8 is not sufficient to absolve QNAP. (If Icons8 got a license from SE that allows them to license to others is a different matter, but there is no evidence that this is the case.)

The fact that the icon used in the firmware is somewhat different from the icon on SO does not constitute a bar to successfully demonstrating infringement. Trademark infringement occurs even if the presumably infringing logo is somewhat different but would still cause people to think that they are looking at the SO logo. Similarity is what the court looks for, not identity.

The existence of other older similar logos does not automatically mean that an infringement claim would be invalid. It would depend on how these older logos have been used.

We can also debate whether the icon in the "Background Task" is the same as Stack Overflow's logo... - IMHO they are different.