Can we have a way to remove all our comments under a post?

Often a quite long discussion is needed in the comments section in order to clarify a post or reach some agreement. And the suggestion to "move the discussion to chat" doesn't make sense for new users. It would be very useful in such situations to be able to easily remove all my comments under a particular post after the discussion has finished.

I'm not referring to flame wars or other off-topic, nonsense discussions. Here is an example:

I've recently answered a question from a new user, and we needed quite a while to clarify my answer. It was because I incorrectly assumed that the user knows how references work, and in fact it was the only bit they were missing. The discussion was thus essential and impossible to carry out in a chat room.

After discussing this notion we've reached an understanding, and I suggested that we should now remove our comments. As a side note: it was this rare moment when a completely new user is actually a reasonable person, who considers all the suggestions and gladly accepts explanations on "how do things work here". So, after a few moments I've noticed all the user's comments deleted and started to delete my own.

And I thought to myself that it would be very convenient to do this with fewer mouse clicks, for example (the comment thread in this picture is not the one from the example described above): 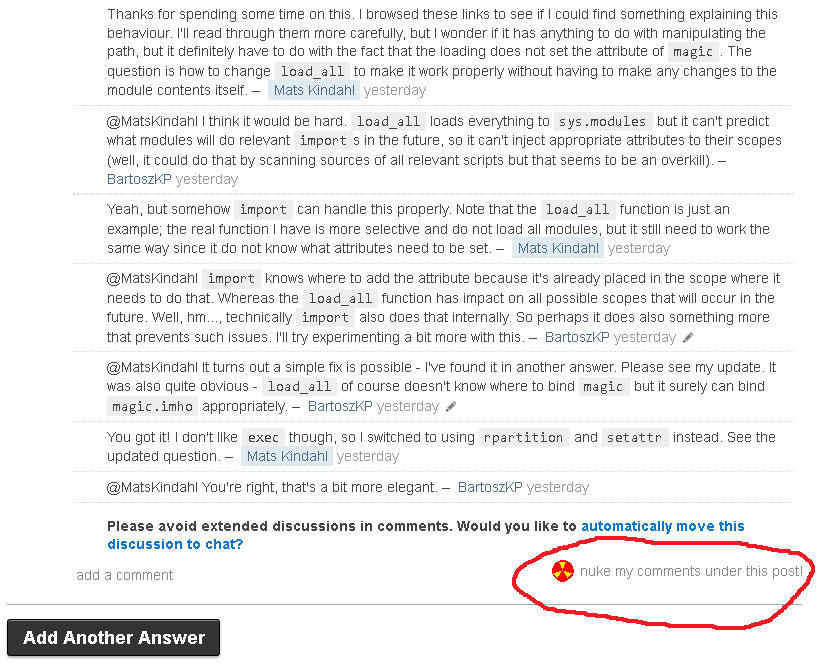 After clicking the new button:

Of course the actual position of the button, it's shape and title may vary, this is just a simple example.

Of course, it would be super cool to have a dialog box with checkboxes allowing user to choose comments to delete, in case when, for example, one of them would still be relevant and the user would want to delete all but this one.

Another "advanced" version inspired by The Minion's comment below: if we don't want to have lots of comments hanging without a context, the feature could work as follows:

For many typical scenarios this would work fine and effectively.

1
96 wrongly declined comment flags in 1 day
23
Add keyboard shortcuts to review queues
3
Comments under my answer disappeared automatically
35
How can we efficiently leave comments for editors?
159
Can I have a dump of rude/abusive comments?