I strongly dislike suggestions about changing our system or "way of doing things" for the benefit of a sub-group of users who will abuse the site regardless of such innovations. So recent discussion around the topic hasn't been enthralling.

But, in reading a recent suggestion about imposing a 24 hour "vote freeze" on meta-linked questions, I saw what I think is an excellent idea from Paul Draper that deserved a bit more attention: voting with stars, rather than arrows.

Rather than displaying an up arrow (heaven/the sky/life) and a down arrow (hell/caves/death) and positive numbers (awards/money/power) and negative numbers (punishment/poverty/weakness), what if we just displayed a 0-5 star rating that averaged the votes?

This would take care of several possible problems with "one stone":

Binary voting is tricky with "so-so" questions and answers.

People don't get as upset over stars.

Posts with no votes would show with N/A (or something similar). The ranking could be something like:

- 0 stars.
This question/answer has some serious issues that can't be easily resolved. It may need to be closed/deleted.

- 1 star.
This question/answer has some glaring issues that might be resolved with heavy editing.

- 2 stars.
This question/answer has some big issues but also some valuable content. It should be edited.

- 3 stars.
This question/answer has valuable content but also some minor issues. Editing is optional.

- 4 stars.
This question/answer has very valuable content but may also have some minor issues. Editing is probably not necessary.

- 5 stars.
This question/answer is excellent in every regard and can be referred to/trusted without reservation.

Voters would also get a -1 reputation hit for rating a question/answer as 0 or 1. Maybe just 0. Not sure about that.

Such a system could easily address some of the biggest (and some smaller) concerns without making the act of voting any more difficult. Those who still prefer a binary system could just vote with 1/5 or 0/5 and go on their merry way. Those who want to provide a more measured or nuanced response would have the ability to do so rather than just refrain from voting, which is what I most often do. And the averaged score would provide much more valuable information then an absolute count.

It's a change to our voting system, which is more or less enshrined in SE culture. Such fundamental changes should not be taken lightly.

Such a core change would not be trivial to implement from a development standpoint.

There's also the question of what to do with all of the existing votes.

People don't get as upset over stars.

Sure they do. CodeProject has used a 5-star rating on articles for years, and that never stopped anyone from complaining when they got a low-star rating. Heck, they finally implemented a system wherein votes of 3 or fewer stars required adding a comment: 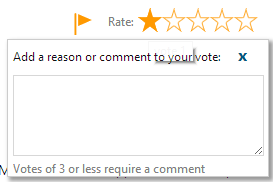 The bigger problem though is that it doesn't map 1-1 to up/down votes; you have 3 other options, and what those mean varies wildly. Some folks never give out 5-star votes save for the most brilliant works, others stick exclusively to 1- and 5-star votes, still others default to 3 for anything they can't really be bothered to form an opinion on - thus diluting everyone else's opinions.

There are countless examples of star ratings falling apart over the years. One of the most ridiculous is probably eBay - if you've ever used eBay, you know how well that works. "4.5 stars? RUNAWAAAAAY!"