Recently it seems that every time I ask a question I get told "off topic", take that to another stack site, it's not about programming. I would really rather not have my account banned from asking question (again) so clearly I am need of some guidance.

The most recent example was a question which I spent some considerable time googling, and trying to find the best home for but as it really did seem that the answer was going to be to come up with a bash script I was certain that this was a programming question. After all although what I needed to control were entries for IPTables it was going to be a script that would need to do the work. However, I was, of course, wrong. Again.

So while I earn my way back to being able to safely ask about iterative XML generation in PHP would someone please be so kind as to educate me because, believe it or not, I do not set out to upset people on daily basis... or ever.

Your question was about programming...

...after four paragraphs of prose that really had nothing to do with the programming question at hand: 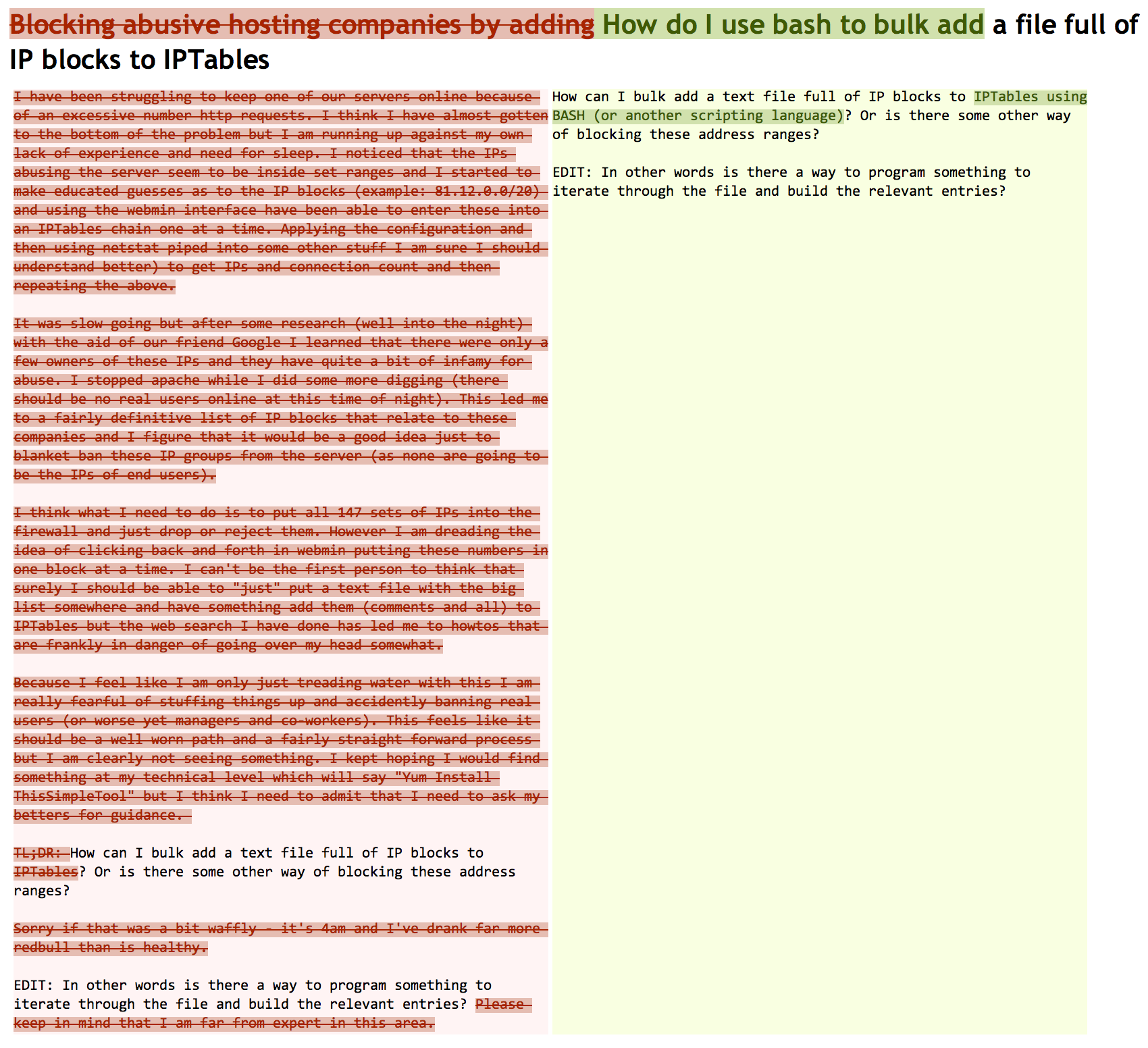 The issues with your questions range from rambling (above), to posting about your NVidia GPU overheating, to asking us to recommend libraries (explicitly off topic), to having problems with Linux screencast software, to using Stack Overflow to try to test SysAdmin problems, to more sysadmin problems, to deleting the one problem that may have actually been a programming problem.

In short, your questions indicate that you don't have a firm understanding of what Stack Overflow is about, and as such you've asked quite a few questions that weren't well received.

You deleted them, perhaps thinking that'd help you -- but it doesn't. The system post-ban algorithm takes into account deleted posts too, so deleting a post won't necessarily allow you to ask more questions.

The revised question (after the change highlighted in George Stocker's answer to this meta-question) is about programming ... but now (I would say) it is a bad question for another reason: you'll note that as I write this it has already garnered three closevotes because "too broad", which is the closest approximation we have in the current system to saying "You're asking us to write your program for you." We do not, as a general rule, want to do that.

You'd probably have better luck if your question started with something like Joshua Terrill's answer to your question, and then went on to an explanation of why that is the best you've been able to come up with, but doesn't do what you want because X, Y, Z.

If you are so new to this sort of thing that you have no idea even how to come up with that simple loop, even after extensive reading of the interwebs, then what you need is not a Q&A site, but an introductory programming textbook and/or a guide to shell scripting for sysadmins. Such books may be found at your friendly local public library. (Ask the reference librarian for recommendations! That's what they're there for!)

It's hard to really say too much either way about this. Being a community site, different people will have differing views on what really constitutes a 'programming' question.

If we take your question about IP tables for example. IP tables themselves are not a 'programming' topic, so initially I'd say it is for something like ServerFault; but if, as you say, you wanted to manipulate them through a bash script (aka programming) it would belong on SO.

Of course, that is just one example. In general, you need to try to use your best judgment... though that seems to not work to well for you.

If your question is about a programming language, about it's syntax, how to write an algorithm etc. then it probably should be on SO. The grey area comes when your question starts to become about a specific 'tool' or program. If you could substitute the tool you are 'programming' with/for with something else, then it is probably the actual code/programming that is under question and belongs on SO, if you can't, then you might need to look for another site.

I'd try to put an example here, but I don't think I could do a worthwhile job that didn't make things clearer.

38
Close reason for "Not in my universe" questions
61
How can I improve my first ever Stack Overflow question?
45
close-reason suggestion: closing a question where the asker wants others to do his homework

149
What is the proper way to approach Stack Overflow as someone totally new to programming?
20
Why do I not receive answers after editing my question? How can I improve the question? Is asking a closely related question considered a duplicate?
26
What are the limits for self-answers? When are they (not) acceptable?
2
Can I ask a question about a mnemonic device for programming syntax?
46
Inquiring about Programming Practices on SO
21
If I attempt to un-delete a question under a question ban, would it still be considered asking a new question?
9
My SO question: Delete? Accept, but explain what I did instead? Start a new topic?
20
Are questions seeking answers in either of two or more languages on-topic?