I've already seen the another post mentioning the additional comments simply adds noice and love the suggestion to convert them into upvotes for the first one.

But then I came across this while going through the review queue: 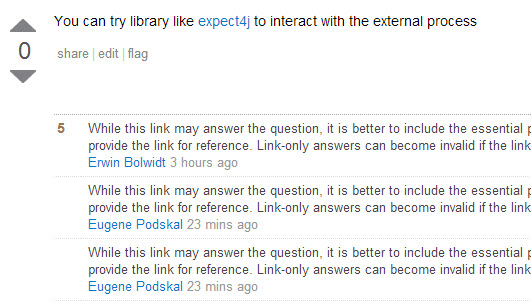 How come the same comment get added twice from the same user?

Update: Not sure if this is specific to one user, found the same again:

According to Eugene's answer, double clicking the delete button (or such review buttons) triggers this behavior.

Can't we have the same for auto comments as well?

There is no mystery - just my mouse at home has recently turned a bit buggy (sometimes making double clicks instead of single clicks) and the "Delete" button got triggered twice before the pop-up window closed.

There were no evil intentions from me or bugs on SO server (client is not so innocent however). Well, popup window can block itself while closing, but as overall it is not a grave defect, and it is quite difficult to trigger in normal conditions.

But I have seen similar double posts from other users, and whether such issues have the same reasons in their cases or not I have no idea whatsoever.

P.S.: Let's hope that e-commerce sites do not similarly allow you to pay twice for ordered goods.

P.S.1: I have just replaced my mouse to spare one, so my issue probably won't repeat itself :)

Not the answer you're looking for? Browse other questions tagged bug status-norepro review comments automatic-comments .