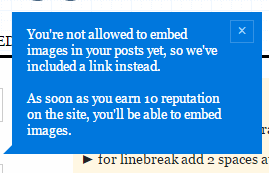 23
How do you add a screenshot image to your Stack Overflow post?
-14
How can l add a screenshot when l ask a public question on stackoverflow.com?
2
How to show plots in Stack Overflow questions
-8
How to attach document or image in this forum?
517
Discourage screenshots of code and/or errors
386
When to flag an answer as "not an answer"
30
What causes new contributors to miss the last line in a code block and paste the image as a hyperlink?
2
How to upload an image