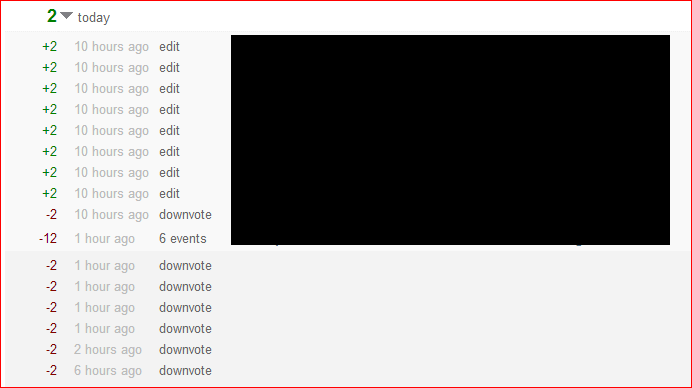 -4
Can we agree to not vote (mostly) on linked questions/answers in meta?
391
Stack Overflow helped me with my problem: on which network can I share my success story?
249
What do I do about receiving an offensive email from another user on Stack Overflow?
173
Can there be legitimate serial downvoting?
123
Are political avatars and profiles OK?
72
Yet another disgruntled new user
100
Initial Edits and Fastest Gun in the West
64
Is my enforcement of Stack Overflow's policy against recommendation questions proper?
6
How to handle user rollbacks due to stubbornness about formatting / content?
27
Does an answer need to have code to be considered complete?
See more linked questions

81
Getting to Know Stack Overflow's Voting Culture
93
Downvotes on Meta are confusing: do they *really* mean poor-post quality, or just disagreement?
212
Can we make it more obvious to new users that downvotes on the main site are not insults and in fact can help them help themselves?
34
Who is the customer for the main site?
15
Is there any reason for the [stackoverflow-teams] tag existing on the main site?