What do you think about a "do some research" delay before posting a question for very low rep users?

I want to start a little discussion on how to avoid all the badly formatted questions where some research on the internet would have brought up thousands of results.

I searched Meta.SO (and meta.stackexchange.com) and only stumbled accross this post.

My suggestion is simple but perhaps may be effectual:

Let very low rep users post a question only after a short delay of time.

This might not be politically incorrect as it won't disallow them to ask a question, but they will be forced to take a small amount of time to think about their problem and to do research.

In concrete: They can click the Ask Question button, and they can begin entering their question. But the Post Your Question button is greyed out like it is in the review for 5 minutes (or another amount of time), and counts down the time with some JavaScript.

So in the meantime, the user can do some research or improve their question.

I thought about a limit of 10-15 reputation for having this displayed. Most times, I see bad questions posted by 1-10 rep users, but I think we don't have to worry much about people above this limit.

For all those who get scared by the idea of a JavaScript countdown: Yeah, this doesn't stop them from posting the questions, but, if they know a way around it by editing the DOM with the developer tools and posting their question, it will be okay - we can assume they have enough knowledge to know what they are doing and so the question should also be a good one.

Research has never been a reason not to let someone ask a question.

That's what downvotes are for: 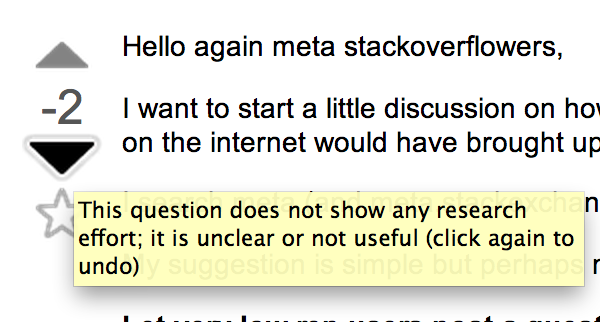 Not only does it take away from our utility (fast answers to questions), it imposes a silly requirement that may not even be applicable in most circumstances.

For what it's worth, my personal experience with free to ask immediately approach has been rather negative but I can't tell, maybe it's just me and maybe things typically tend to go better than that.

From what I learned so far, my understanding is that ability to quickly post a question has been considered one of key features when Stack Overflow was created. Podcast #23 is fairly straightforward about this (bold font in below quote is mine):

the way we built the site, the really low friction nature of it...

I think every programmer should want this system to exist, again, for their own reasons, right? Like, they just want answers to their freakin' programming questions. They don't want to deal with a lot of stupid overhead, a lot of form logins, or searching a bunch of stuff. They just want a quick and dirty way to put in a question and get a reasonable answer...

On the other hand, I learned that above is not an absolute requirement.

For example, it has been compromised about two years after podcast when registration was introduced at SO, forcing users to pass through "form logins" prior to asking their first question:

I know SO's policy is "you don't have to register to ask questions,"

I have decided this policy no longer makes sense...

One can also argue that it was further compromised recently, when asking questions became rate-limited to 1 per 90 minutes for users having less than 125 rep. Granted, it's not exactly the same as delaying the first question, but pretty close. And the reasoning to justify the increased delay reads pretty generic:

If you need to ask questions more than every 1.5 hours, you probably aren't putting enough thought, time or both into your questions, which isn't fair to us, as it diminishes the perceived quality of the resource we're working very hard to build and maintain.

Note, this setting is only different on Stack Overflow, the limit is a bit higher on the rest of the sites in our network. We had to increase the amount of time folks need to wait until they become established users because people would request that we help them through every task they undertook during their work day. This is supposed to be Q&A, not pair programming.