Is the count for "Off-Topic > Other" reason less valuable than the other reasons for vote to close?

I stumbled across this very bad question: USING SINGLE FOR LOOP List Even and odd numbers from 1-100 in Java1

There were 4 votes to close and my vote was needed to close the question. But the question is closed with the (IMO totally wrong) reason:

"Questions seeking debugging help ("why isn't this code working?") must include the desired behavior, a specific problem or error and the shortest code necessary to reproduce it in the question itself. Questions without a clear problem statement are not useful to other readers. See: How to create a Minimal, Complete, and Verifiable example."

This, for me, wasn't the reason to vote to close because OP didn't even post a single line of code, so there's no way to say why isn't this code working?. I, instead, voted to close for the Other reason, started by @SotiriosDelimanolis, which seems more reasonable:

This question appears to be off-topic because it is a code writing request. (3 in 6 minutes. Keep it up.)

Still, the question was put on hold by the why isn't this code working? reason with just 2 votes to close, while the other had 3 votes to close: 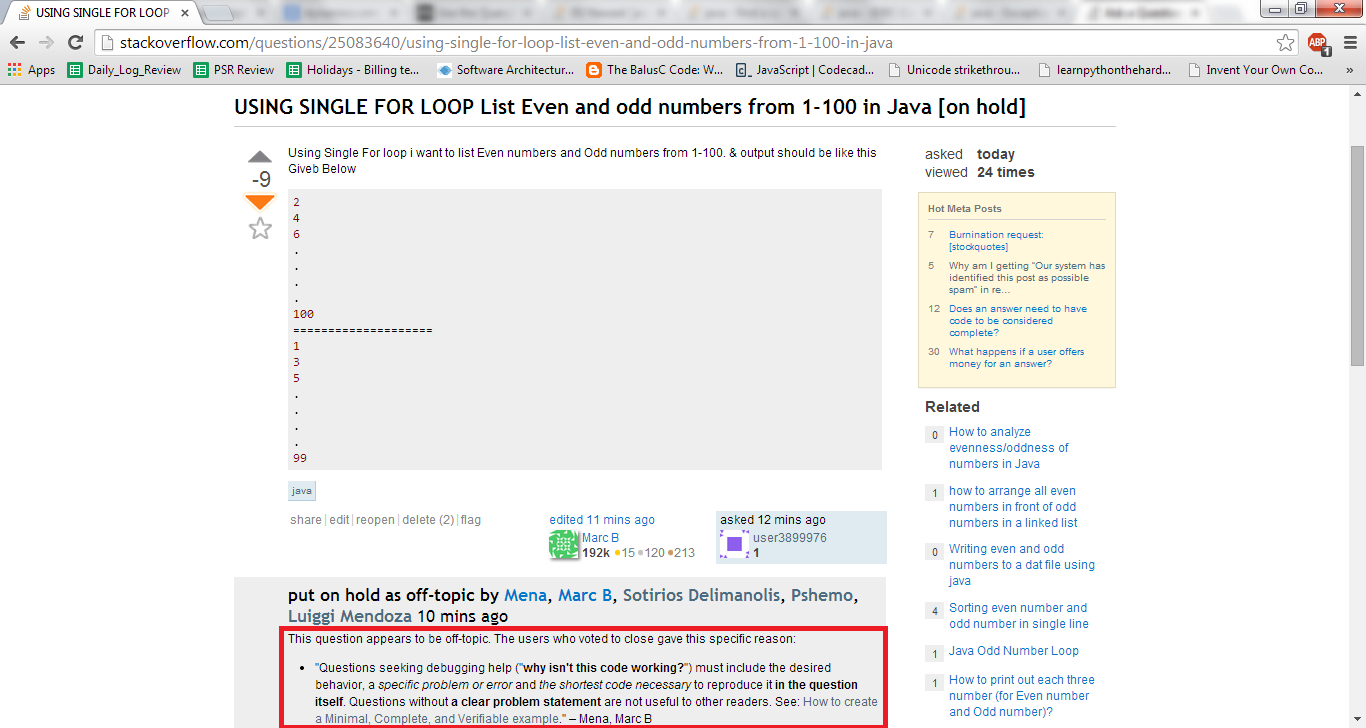 Is this a bug in the vote to close option? Or is there any reason to mark the default options for vote to close over the Off-Topic > Other even if the Other has more votes?

1The question was deleted but the image of the question will give you the idea of how bad it was.

You have stumbled across the funny nature of the "Off-topic" close reasons.

Normally close votes are not broken out by type. 4 votes for "Unclear what you are asking" and 1 vote for "Too Broad" will be displayed as all 5 votes as "Unclear". This is how the close system works, although there are feature requests on MSE to change this behavior.

For example, the following image show the "Off-Topic" close reason selected and both options with all 4 close voters accounted for (one being a mod, which is why there isn't 5).

The only exception is a post that is closed for the "Other" reason. These are not displayed at all in the Close box and only left as a comment under the question.

I had trouble finding a perfect example, but here is a (now deleted) MSE question in which I voted to close as Off-Topic with a custom reason and it was closed (by a mod) for another Off-Topic reason. As such the question is closed as off-topic, but my close vote reason does not appear in the close notification because it was a custom reason

Had you or any of the other 2 users who selected the "Other" option instead choose one of the other off-topic reasons, you would have been listed in the close box. But since you picked the "Other" reason, your custom message is only shown in the comments.

Not the answer you're looking for? Browse other questions tagged bug vote-to-close close-reasons .

3
Yellow banner says I marked the question as duplicate - but I didn't!